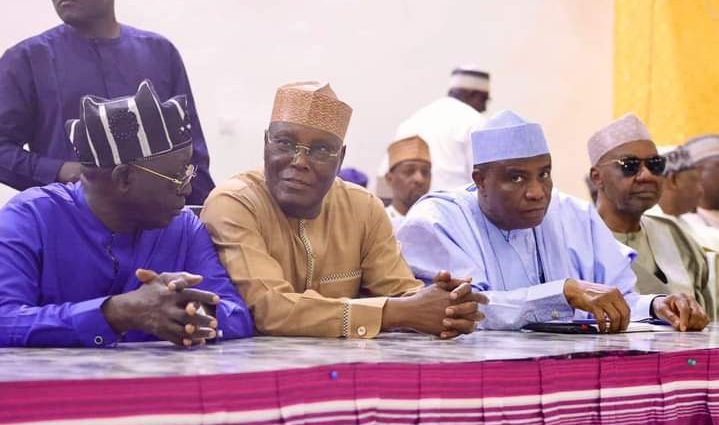 The Concerned PDP League (CPDPL), on Friday, 18 November, lashed out at the presidential candidate of the Peoples Democratic Party (PDP), Atiku Abubakar, for his criticism of the ”lopsided appointments” made by President Buhari’s administration, which has become synonymous with the regime.

Atiku Abubakar, speaking during an interactive session with members of the Nigerian Guild of Editors (NGE) in Lagos, on Wednesday, stated that “PDP will set up a government of national unity. Every section or geopolitical zones will be carried along in appointments.

“We will unify this country. Today we have 17 northerners who are heads of various security agencies in the country. I won’t do that.
“I will ensure every geopolitical zone is represented in these security outfits, ” he added.

The Director of Media and Advocacy of the Concerned PDP League(CPDPL), Rashidat Abubakar, while reacting to Atiku’s statement said, “Atiku is not practicing in PDP what he is promising Nigerians and that, ‘you can fool some of the people all of the time, but can not fool all of the people all of the time.” Abubakar made this known in Abuja after the PDP pressure group’s National Executive meeting presided over by the Deputy Leader, Fatima A Umar.

The CPDPL Director of Media and Advocacy asked, “where has Atiku been in the past 7 years that it’s now he is seeing the lopsided appointment against the south by the Buhari administration? Is it because of the elections? Majorly, it is only governor Wike in the past 7 years that has been speaking in defence of the PDP. Has the PDP Presidential candidate just woken up from slumber only to realise Governor Wike’s popularity and invitations to dignitaries of different political colours to commission completed projects in Rivers? Is that why Atiku and his buy-inners now talk about how he is going to make sure every zone has a member of the Security Council? But Atiku is doing quite opposite in PDP, instead of being a unifier, Atiku is a divider in chief. I am beginning to wonder if PDP still has leaders, elders, and politicians with conscience, morals, principles, as well as love and unity of Nigeria, she added.”

Recall that since the emergence of Atiku Abubakar as the presidential candidate of the People’s Democratic Party for the 2023 general election, there have been intensified moves by some aggrieved members of the party, particularly from the only pressure group in the PDP, the Concerned PDP League (CPDPL) that styled itself as the ‘Justice Group’ and the Rivers State Governor led group that also styled itself as the “Integrity group” and the “G5 governor’s,” for Ayu’s replacement by a candidate from the south to strike a balance between the north and south, because PDP has been northernised under Atiku’s watch. So the difference between him and President Buhari is that he is doing it at the party level while Buhari is doing it at the national level.

“Atiku’s statement is a deceptively cynical statement intended to woo voters. The two areas Atiku has failed woefully in addressing in his primary constituency, PDP, that’s Unity and Equity, Fairness and Justice are the areas he is promising the citizens of our great country that he will address in our great nation Nigeria if elected. The truth is that we will stand against any presidential candidate in respective of the political party that will want to deceive Nigerians because, Nigerians have suffered enough in the hands of insincere leaders, Rashidat Abubakar said.

On behalf of the CPDPL, Rashidat Abubakar however, extends congratulations, prayers, and best wishes to Dr. Ayu on his 70th birthday celebration.