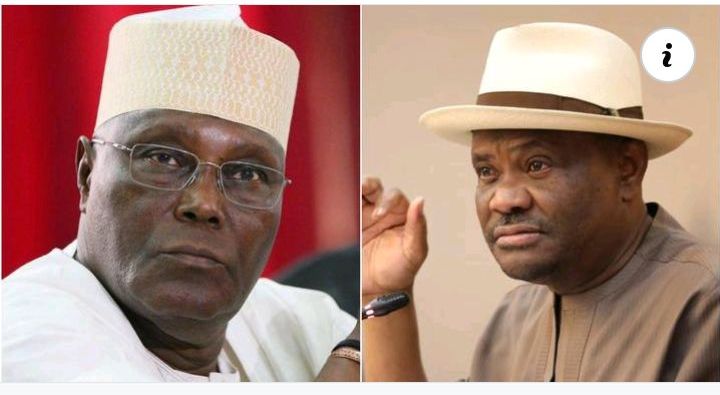 As the 2023 general election inches closer, political parties and their candidates are doing everything within their power to outshine each other via rallies, scorecards, and propaganda. And in some of the parties, however, internal wranglings and violations of their party constitution seem to be dimming their chances of victory. And PDP stands out as one of such unlucky political parties.

The Concerned PDP League (CPDPL), Governor Nyesom Wike, and four other governors — Seyi Makinde of Oyo, Samuel Ortom of Benue, Okezie Ikpeazu of Abia, and Ifeanyi Ugwuanyi of Enugu — have been at the forefront of the calls for Senator Iyorchia Ayu to step down as National Chairman and in favour of a Chairperson from the Southern part of the country.

The CPDPL, the 5 Governors, and others in the struggle predicated their position on premise that it is simply an affront and gross violation of the PDP constitution and the Federal Character principle to allow both the party’s National Chairman and Presidential Candidate to come from the Northern part of the country.

Speaking on Sunrise Daily, a Channels Television programme, on Wednesday, 23 November 2022, Daniel Bwala, spokesperson for the Atiku/Okowa Presidential Campaign Council (PCC) said that Governor Wike is not fighting for equity, fairness, and justice.

Mr. Bwala asserted that Governor Wike is also guilty of the same complaint he levied against the National party. Bwala said, “From every angle, you look at it, his message is the opposite of what he practices. He is an Ikwerre man, he took over from an Ikwerre man. His chief of staff is an Ikwerre man. The Vice-Chancellor and the Rector of the state’s tertiary institutions are from Ikwerre. And the Governor appointed them. The Chief Judge is an Ikwerre man. And when you come to the party, the Governorship candidate is from the same senatorial district as that of the State Party Chairman, Bwala insisted.”

Reacting to the claim, Comrade Warmate, National Leader of the CPDPL spoke with our correspondence in Warri, after meeting with the Delta State Chapter on Friday 25th November 2022. Comrade D. Z. Warmate took a swipe at Mr. Daniel Bwala and said that ” the PDP PCC spokesperson, Mr. Daniel Bwala’s criticism of Governor Wike is indicative of the reason for his few months sojourn in the PDP. Mr. Bwala’s arrogance and display of ignorance about the dynamics and arrangement in Rivers PDP Chapter” is astonishing. Comrade Warmate said Mr. Bwala as a new recruit into the PDP, it’s incumbent on Mr. Bwala to accord great respect to a towering Governor such as Governor Wike. Instead, Mr. Bwala preferred to cast aspersions and innuendos on Governor Wike who stick with the party through thick and thin, while Mr. Bwala’s paymasters were in the APC protecting their selfish interests.

Mr. Daniel Bwala claimed that he left his former political home, the All Progressive Congress (APC) because of a perceived Northern Christians’ marginalization in the party. And the CPDPL and the integrity group led by Governor Wike are fighting the good fight for equity, justice, and fairness – It is, therefore, bewildering as to how Mr. Bwala has incapable of deciphering the apparent incongruency of his bogus reason for leaving the APC and our good fight against Northern domination of the PDP.

Comrade Warmate emphasized that “In Rivers State, the key political positions are basically distributed between the Riverine and Upland dichotomy, just as the way it used to be arranged at the National level, (Northern region, and Southern region) and not by Senatorial districts. That is why it’s possible for both the Governorship candidate and the PDP State Chairman to come from the same Senatorial district.”

“From 1999 to 2007 His Excellency Sir, Dr., Peter O. Odili from Ogba-Egbema-Ndoni LGA of the Upland zone was the governor, and Alabo Marshal Sokari Harry from Degema LGA of the Riverine zone was the Chairman of PDP from 1999 to 2002, and both the then Governor and the State Chairman came from the Rivers West Senatorial district. Prince Uche Secondus who took over the party’s reign from 2002 to 2008 is also from Andoni LGA of the Riverine zone since the governor was still from the upland zone.”

Presently the State Chairman, Ambassador Desmond Akawor is from Oyigbo LGA of the Upland zone, and the Governorship flag bearer, Mr. Siminitare Fubara is from Opobo-Nkoro LGA of the Riverine zone. So based on Rivers State’s political culture and traditions, it’s apparent that Gov. Wike put his money where his mouth is. practices what he is preaching, Therefore Mr. Bwala’s comments and innuendos against Governor Wike do not hold water but are intended to be a fly in the ointment because the duplicity and the hegemonic attitude of Waziri of Adamawa are against the grain of natural justice.

As Bwala, the PDAPC man points one finger at Governor Wike, the other four fingers at Atiku, Ayu, and the rest of the hangers-on that are working against our great party, because it is a well-known fact that a house divided against itself will not stand.

Take, for instance, all the key positions occupied by the north. The Presidential candidate, Alhaji Atiku Abubakar, and Daniel Bwala, the PDAPC man, are from the same state of Adamawa. The National Chairman, Dr. Iyorchia Ayu, and the PCC spokesperson,  Sen. Dino Melaye from Benue and  Kogi States respectively. The Director General (DG) of PCC His Excellency, Right Hon. Aminu Waziri Tambuwa and Hon. Umar Muhammed Bature who doubles up as the National Organizing Secretary (NOS) and Director Field Operation PCC are both from Sokoto State. And the Director of Finance, PCC, Hon. Abdullahi Hussaini MaiBasira is from Niger state, to mention but a few. Therefore, Mr. Bwala’s aspersions on Governor Wike can be likened to the case of a kettle calling a pot black – No wonder the PDAPC man, Mr. Bwala finds himself in such an intractable conundrum.

But Comrade Warmate, in countering Fayose’s statements said, “PDP officially or unofficially is not dead. How would a sane person say that a party with a serving Governor in Oyo State and an incoming Governor in Osun State and several House of Representatives and Assembly members and with millions of party faithful are said to have been dead in Lagos and the South West? It’s just an attempt to misrepresent PDP to Nigerians, but surely he has failed.

Because some leaders are not living up to the expectations of party faithfuls and the constitution, and causing multidimensional issues does not mean the party is dead in the South West, the CPDPL leader said.

Comrade Warmate enjoined party faithful and Nigerians to disregard Mr. Daniel Bwala, the CPDPL PDP prodigal son’s statements against Governor Wike, and Isaac Fayose’s Statement Against PDP. And that the CPDPL and the Integrity group are fighting the good fight for justice, equity, and fairness in the PDP.