‘Why I Was Kind To Journalist We Kidnapped’ 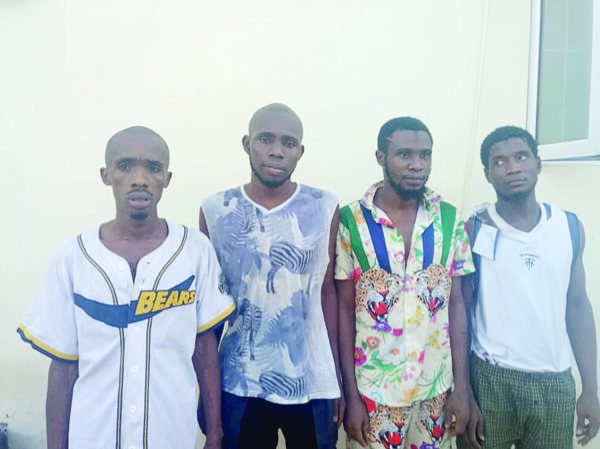 Recently, the print and electronic media were awash with news of the arrest of four kidnap suspects, by operatives attached to  Operation Puff Adder, in connection with the abduction of a journalist, three months ago, in Lugbe area of Abuja.

The journalist had barely parked his vehicle in front of Lugbe Kingdom Hall of Jehovah Witness, when some strangers, later discovered to be kidnappers,  accosted him. Pointing guns at him, they bundled him into their operational vehicle and zoomed off to their hideout, somewhere in Karimo area of the Federal Capital Territory.

Surprisingly, the kidnappers’ den was discovered to be a residential building shared by other tenants. On why the tenants did not take note of the activities of the tenants and make raise the alarm to relevant authorities has remained a poser to be addressed.

The journalist was kept in one of the apartments, from where his family was contacted for payment of N50 million ransom for his release. Crime Guard gathered that over N2 million was paid for his release. But the suspects claimed that they only shared N1 million among themselves.

In this interview, the suspects:  Patrick Haniel,  30; Ige Godwin, 29;  Salim Mohammed, 36 and Isa Abdulwahab, 28, disclosed the roles they played in the kidnap.

Twenty-eight-year-old Godwin, a graduate of Mathematics from the National Open University, Abuja, said that the victim was picked at random. The Edo-state born suspect who claimed to have taught at Kings Care Universal School and Japester Academy, both located in Abuja, said they were never aware that their victim was a journalist.

“Thereafter, I contacted Isa Abdulwahab and Ige Godwin. I had a gun which was stolen from Mr Williams Omo, a Computer Technician and Abdulwahab brought a gun too. I took them in my car to Lugbe Kingdom hall, where we saw a man who was parking his car. My colleagues said we should get him.  We did and took him to our boss, IK, from where he was taken to Karimo, where Haniel, Patrick and Abdulwahab stayed with him. This is my first time doing it. Three of us, excluding Saliu Mohammed, carried out the kidnap. IK  collected N1 million out of which he gave us N150,000 each.  I spent N40,000 on myself and used the rest to buy foodstuff at home”.

On his part,  Akwa-Ibom State born  Haniel, who expressed regrets over his indulgence, said he showed the journalist kindness while in detention, on discovering that he was a Jehovah Witness’ member like himself.

According to him, “ IK, took us to Karimo, a local community, where he rented the place to keep captives. There are tenants in the building we took the man to.  He was kept in a one-room self-contained, where he took his bath. We used a cap to cover his face throughout his stay.  We fed him three times a day. But he selected his food.  At times, he would demand rice without stew. But he ate bread mostly. We did not beat him.

“ When I realized he was a Witness as I am, I became sober.  I  did not even know he was picked right in front of our Assembly because I did not know my way around there.

“ I tried all I could to ensure he was okay, by giving him what he requested for. At a point, I apologized to him. I told him I was a Witness but that I  joined kidnapping out of frustration and that, his abduction was my first.

He interacted well with me. He even said he had forgiven me and prayed for me, that God should help me out of this. He also advised me to quit and that he would love to see me in person after the issue, to discuss more with me.

“I joined the gang because I was stranded. I needed a house urgently.  I used part of my share of the money to rent a house at Galadimawa. I got married about six months ago, before the incident. My wife travelled to Lagos, to work and  I do not know if she is aware I have been arrested.

I  regret getting myself involved in this.  I have disappointed my family”.

While the third suspect, Abdulwahab, also admitted to having kept watch over their captive in the room,  Salim, on his part,  said he did not go with them to kidnap the victim. He stated that one of the guns recovered from the gang belonged to him.

He said, “ I only used the gun to go for two robbery operations with Haniel”.

The Force Public Relations Officer, Deputy Commissioner of Police, Frank Mba, earlier in a statement announced the arrest of the suspects. He disclosed that a locally made revolver gun, three live AK 47 ammunition, a battle axe, phones and masks used to blindfold victims, were recovered from the suspects.

DCP Mba added that efforts were being intensified to arrest other fleeing members of the gang.