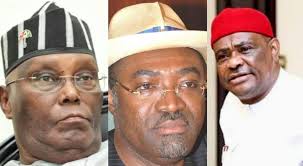 The Rivers State chapter of the Concerned PDP League (CPDPL), which has toed the line of its National group by insisting and remained consistent in its resolve not to support the presidential candidate of the People’s Democratic Party (PDP), Alhaji Atiku Abubakar, until equity, fairness, and justice prevailed in the party, has condemned the claim of Dr. Sekibo and described him as a failed politician.

The Director-General of the presidential campaign council in Rivers State, Dr. Abiye Sekibo,  in Port Harcourt on Wednesday in a meeting with some Ogoni PDP elders council said, ”Atiku is a man that I know personally and he’s a man that I have had an opportunity to work with when he was Vice President. I was a minister of transportation in that government. He has touched so many lives, especially in Rivers state. Atiku Abubakar established the biggest company in Rivers state while he was the Vice President and he did not even take it to Lagos or even to his own state in Adamawa.”

Countering the statement of the former minister, the new leader of the Rivers state chapter of the Concerned PDP League (CPDPL), Comrade Komasi Kubani, while addressing some Ogoni youths in Bori town, the ancestral or traditional headquarters of the Ogoni people and headquarters of Khana LGA, on Saturday 3rd December 2022, said, “We can no longer be deserved by spent force politicians who want to use the people they did not empower and the state they did not contribute meaningfully to its development to gain political relevance at the national level. Please ask Dr. Sekibo to tell Rivers people, how many of our people he empowered and what he contributed to the development of the state when he was the secretary to the government of Rivers state and later Minister of transportation. Was it not cultism that hold sway in Rivers state when he was holding public office? Enough is enough of all this deceit.”

“On the contrary, Gov. Wike told us what he did as Chief of Staff, Minister of State Education and what he is doing now as Governor of our great state for Rivers people which even the blind can see.”

“Let me also say that the biggest company in Rivers state was not established or owned by Atiku and secondly it’s Atiku that has shown ingratitude to Rivers people by scuttling the chances of our son Dr. Good luck E. Jonathan GCFR to win his second term bid in the 2015 presidential election and another of our son Barr. Nyesom E. Wike CON chance to be the presidential candidate of PDP despite the hospitality himself and his business enjoyed from us, comrade Kubani said.”

Therefore, it’s very unfortunate that some supposedly respected Rivers indigenes will support Atiku Abubakar to promote their selfish interests as usual at the expense of the common good of Rivers people. What else do you want us to tell you for you to know that Atiku does not deserve our votes, Comrade Kubani said.

As for us, we will not vote for Atiku because he can’t protect the interest of the Rivers people. We will only vote for a presidential candidate that can protect Rivers’ interest and our national leadership and leader direct us to vote for.

Already we have received directives from our national body to work for the victory of the PDP governorship candidate & all senate, house of representative, and assembly PDP candidates. As long as they give us roles to play, we will.