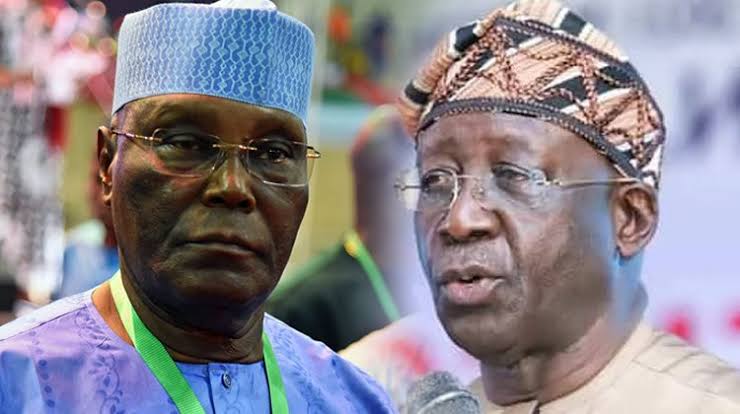 The Concerned PDP League (CPDPL) has lambasted the People’s Democratic Party (PDP), National Chairman, for alleged failure to present the party’s statement of accounts to the party faithful and the general public on December 10th as promised, and described it as “yet another failed promises of Ayu and a proof of the worthlessness of his promises”.

The group, therefore, beseeched Nigerians not to vote for Atiku for his deafening silence over allegations of corruption and malfeasance against the embattled National Chairman.

1. Ayu collected N1 billion bribe in Lagos via a proxy of one of the Presidential aspirants to ensure his emergence as the party flag bearer,

2. Ayu collected the sum of N100 million each from two sources (a serving Governor and the NWWC) all in the name of one project.

3. That Ayu has channeled over N12 billion generated  during the party primaries to build a private university in his home state of Benue, and

4. That the contract for the renovation of the PDP Democratic Institute was given to one of Dr. Ayu’s son’s. Also, The Nation Newspaper has alleged how over N10 billion generated from the sales of nomination forms has been depleted to N1 billion.

And also, the alleged NWC bribery and N12 million for the renovation and construction of 3 toilets scandals and the petition to the Anti-Graft agency to investigate and prosecute the PDP National Chairman and others over bribery and mismanagement of over N10 billion, are some of the accusations confronting the troubled National Chairman.

As a fallout of the pressure from the alleged corruption allegations against him, Ayu allegedly promised party faithfuls to get the income and expenditure (account statement) ready for presentation to the party’s National Executive Committee (NEC) at the first year in office anniversary of the present NWC on December 10th, 2022. He said this when he hosted the Forum of Elected Ex-Officio Members of the party who paid him a visit at the PDP National Headquarters on October 7th, 2022.

But reacting to the highly anticipated but failed promise of Sen. Iyorchia Ayu, the Concerned PDP League in a press release signed by it’s Leader and National Secretary, and a viral video by the Leader, condemned Ayu for what it called “Yet another failed promise of Ayu. The group also condemned the deafening silence of the Presidential flag bearer of PDP in all of this, describing Atiku’s Silence as oppression of party faithfuls and an indication of his inability to make competent and decisive decisions competence.

The PDP pressure group urges Nigerians emphatically reject the promises of Ayu and Atiku of rescuing, rebuilding, and unifying the country, because they have failed in their primary social contract with PDP members, for lack of accountability and inclusivity amongst many others, by virtue of the position they are occupying in the party.

The CPDPL also claimed that its Freedom of Information letter demanded detailed financial transactions but was rebuffed with such arrogance by the party leadership. It is indicative of the leadership characteristics under Ayu’s watch.

The CPDPL however, commended the integrity group for standing up for justice, equity, and internal democracy in the party, while signaling the birth of a new Nigeria for all.

Read An Extract From The Press Release & A Viral Video.

Let us also say that, in order to explore the party’s internal mechanism, on August 8, 2022, we submitted a letter to our party National Treasurer at Wadata Plaza, and the letter is titled; Application Brought Pursuant To The Freedom Of Information Act 2011 For The Certified True Copies Of Certain Public Documents Relating To PDP, “which we asked for everything relating to the finance of our party but in their usual manner, the party leadership simply ignored our request.

Meanwhile, after a long heightened revelation and pressure from the CPDPL, Integrity group, and other party patriots, Ayu allegedly promised party faithfuls to get the income and expenditure (account statement) ready for presentation to the party’s National Executive Committee (NEC) and in extension the general public at the first year in office anniversary of the present NWC on December 10th, 2022. He said this when he hosted the Forum of Elected Ex-Officio Members of the party who paid him a visit at the PDP National Headquarters on October 7th, 2022.

The question we are asking now is, what is Ayu hiding and why is he afraid of publishing the PDP statement of account? 10th December 2022 has come and gone, No NEC meeting, No presentation of the account statement. Today is the 18th of December and people have started traveling for the Christmas festivity already we have less than 13 days to the end of the year, so when will Ayu call for NEC? yet another failed promise of Ayu.

Therefore, Our biggest worry and concern in all of this shameful act, is the brazing silence, ineptitude, and nonchalant attitude of the presidential candidate and leader of our party, Alhaji Atiku Abubakar.

Alhaji Atiku Abubakar as the leader of our great party has demonstrated gross incompetence by his inability to take critical decisions and actions for the progress of the party, in the face of huge corruption allegations against Dr. Iyorchia Ayu and other crises in the party.

He, rather than advise the National Chairman to resign for proper investigation into all the allegations of corruption against Ayu, as to present PDP as a clean and serious party, Atiku is flying and traveling with him for a campaign and making promises he has not been able to keep in his primary constituency of PDP. PDP under the leadership of Ayu and Atiku is a big disaster.

Since Atiku has displayed attributes of poor leadership quality in the handling of the crisis and affairs of PDP, we are afraid that we can no longer guarantee Nigerians of his ability to rescue Nigeria if voted, and we, therefore, urge and advise Nigerians not to vote for Alhaji Atiku Abubakar to avoid a repeat of a regrettable decision and choice in the 2023 presidential election.

We cannot conclude our press release without must sincerely commending the integrity group for amplifying and giving meaning to our voice.
God bless you all. God bless our great Party, the PDP and God bless our nation, Nigeria.