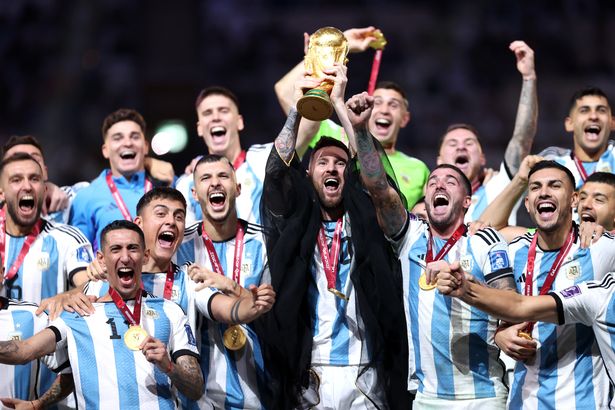 Lionel Messi has led Argentina to World Cup glory after the most thrilling final in the 92-year history of the tournament.

Argentina took the lead through Messi and Angel Di Maria, only for Kylian Mbappe to score a late brace. Messi restored Argentina’s lead in extra time, but Mbappe again hit back for France, completing his hat-trick and taking the game to a penalty shootout.

Argentina won the shootout 4-2, to claim the World Cup and victory in one of the sport’s all-time great games.

“I told (my players) to be optimistic, that was the main thing. We were playing well and (France) only had two chances. France equalized right before full-time, so we had to go to extra time. We knew we would create chances.

“I told them to stay calm. And then right before the penalties, Emi Martinez is a very positive goalkeeper. He told his teammates he would save some penalties. We had so many players who wanted to take a penalty and we had a goalkeeper who said he was going to save two. Great!

“If (Messi) wants to keep playing, he’ll be with our team. He’s more than entitled to decide what he wants to do with his career. It’s just such a privilege to coach him and to have him on the team. Everything that he transmits to his teammates, it’s just unparalleled. I’ve never seen a person who gives so much to their team.”

When asked about Diego Maradona: “Well, your question reminds me that he’s not here. Otherwise, you might think he was still among us. Luckily, we were able to lift this trophy, something we’ve been dreaming about for so long. We are such a passionate football country and if he was here, he would have enjoyed it so much. I wish he was here to enjoy it.”

“They have achieved this title and I’m so proud of them and happy that we are world champions. We deserved to win and (France) only had some moments when they created problems for us.

“The players knew the team an hour and a half before the game. We decided to play Di Maria on the left, we knew this would be the best approach. Alexis (Mac Allister) going the through the lines. Angel (Di Maria) on the left was very open throughout and the players read the game very well.

“Everyone contributed. Rodrigo (De Paul) and Enzo (Fernandez) had great performances to make sure Molina was never one-on-one with Mbappe. But then we conceded two goals. These things happen, they played well and they’re tough opponents. They were world champions.”

“Now I feel calm. I would like to talk about us becoming World Cup winners but that match was completely insane. As a coach, I know we should have won in the first 90 minutes and then again in extra time. But we weren’t lucky enough to do that.

“In terms of my feelings, it wasn’t in my plan to become a World Cup winner and now the most important thing is to think about how we achieved it.

“We are fighters and we never stopped fighting. We didn’t deserve to draw. It was similar to the Netherlands game in that way but we kept fighting because we wanted to win.”

Lionel Messi has no plans to imminently retire from international football because he wants to “continue playing as a champion”.

Messi will be 38 by the time the next World Cup starts in 2026, and will turn 39 during the tournament.

“I’m not retiring from the national team,” he said after the match. “I want to continue playing as a champion.”

Messi had previously said that he expects the Qatar World Cup to be his last.

“It’s my last World Cup,” he said after the semi-final victory over Croatia.

“It is impressive to end up playing a final. There’s a long way to go for the next one, there are many years and surely because of age I won’t get to it.”

The final, which ended 3-3 after extra time, had it all — but is it the best World Cup final ever?

How does it compare with Argentina’s victory with Diego Maradona in 1986? Or a Zinedine Zidane-inspired France win over Brazil in 1998? Or a masterful Brazil beating Italy 4-1 in 1970? Or Hurst and England seeing off West Germany in 1966?

2022-12-18
Previous Post: PDP Statement Of Accounts: Another Failed Promises of Ayu, CPDPL Condemns Atiku’s Silence
Next Post: BREAKING: No Man is God: But “You Once Played God”-CPDPL Reminds Atiku