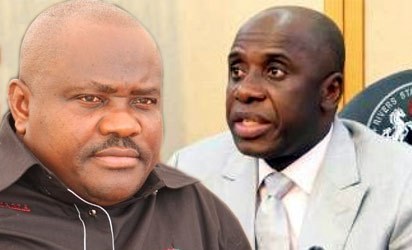 Suddenly, we are turning to a rudderless society where elders are afraid to stand up and be counted. Their fear is that the younger generation worships money more than wisdom. All well meaning Nigerians should begin to imbibe the spirit of forgiveness and reconciliation.

I want to begin with Rivers State. Whatever affects the state directly, affects the country indirectly. There is so much federal wealth in that area that if we fail to encourage peace, this nation will continue to quake economically.

And I must commend Governor Nyesom Ezebunwo Wike for waving the white flag. Elections are over, Rivers must not continue to bleed. He could have made mistakes, I saw him cry on national television over the bloodletting.

Honourable Chibuike Rotimi Amaechi, as a former governor and presently, minister of the Federal Republic knows there is no place like home. So I do not think he is bent on making the state hot for anyone. Everything is all about politics. This we must understand.

Wike has had more than a fair share of strictures poured on him. Amaechi has faced enough ridicule. In all this, where are our elders? We cannot continue to stand aloof while these brothers engage battle gear.

Wike and Amaechi are from Ikwerre, Rivers State. The latter was the first Ikwerre son to govern the state. And the people were magnanimous enough to allow them to have another shot at leadership.

Since Wike has shown enough capacity to embrace everyone, I would like him to set up a 10-man peace committee. Membership should be drawn from various parts of the country.

Bishop Kukah is a Roman Catholic, and has been involved in conflict resolution. He is also very well known in the state especially in Ogoni land. As a priest, he is expected to apply biblical principles.

Igwe Agubuzu is the Chairman, Enugu State Council of Traditional Rulers. As a royal father, he knows what it takes to settle misunderstanding between two brothers. Beyond that, he is also a diplomat. I met him in Lusaka 27 years ago, when he was the Nigerian High Commissioner in Zambia.

Chief Udenwa is a former governor of Imo State. The idea is for Wike and Amaechi to have someone who has also been in their shoes. Wike was a minister, so was Udenwa. Amaechi is a serving minister.

Udenwa also understands the politics of Rivers State. He lived in Port Harcourt as an accountant with Monier Construction Company[MCC]. I guess his wife, Theresa, was also a lecturer in one of the universities there.

Duke is a stakeholder in Rivers State. His wife, Onari, is a Kalabari Princess. As a former governor, he is also at home with the politics of power and loyalty. Deep down in the crisis, one will discover some of these factors.

We cannot wash away Amaechi’s leadership of the Conference of Nigerian Speakers. He fought for the autonomy of state assemblies and is still widely regarded as speaker of speakers.

Dr. Yemi Ogunbiyi may be Yoruba and Public Relations consultant. He also has roots in the South-South. As a former Managing Director of the Daily Times, he remembers quite well the role of a Rivers son, Emmanuel Dagogo Jaja, at Agidingbi.

Senator Omu will add the motherly touch. She retired from the Nigeria Prisons Service as a controller. That means that she has observed human behavioral patterns for a long while. Her husband, Gen Paul Omu, was also a military governor.

There cannot be peace without history. The committee must identify some powerful forces behind Rivers politics. The backgrounds of the different stake holders should not be brushed aside.

The ‘Big Masquerade,’ no doubt, is Dr. Peter Otunuya Odili. He was governor of the State from 1999 to 2003. He was also deputy governor, between 1992 and 1993. Odili is a knight of the Roman Catholic Church, attended Christ the Kings College [CKC], Onitsha and is married to Justice Mary Odili from Imo State.

Bishop Kukah knows the appropriate homily to woo Odili. Udenwa and Odili were Biafran soldiers during the war. While Udenwa went to the battle field, Odili trained soldiers at the Biafra School of Infantry, attached to Lt. Peter Igezunya Adomokai and commanded by Captain Ganiyu Adeleke.

Odili is like a father to Amaechi. We all know the story. Amaechi’s first job after graduating from the University of Port Harcourt was at PAMO Clinics, owned by the Odilis. PAMO is acronym for Peter and Mary Odili. Amaechi also served as Personal Assistant when Odili was deputy governor.

This does not in any way diminish the Transport minister. He has also earned his medals. The good thing is that their differences do not go beyond the façade. We call it family affair.

Sir Celestine Ngozichim Omehia was governor from May 29–October 25, 2007. He succeeded Odili and gave way to Amaechi, his cousin. After Amaechi came Wike, a fellow Ikwerre man. So we see, this is a case of brothers at war.

Tele Ikuru was deputy governor under Omehia and was retained by Amaechi. He followed the minister to APC, now he has returned to the PDP. He carries the interest of the Andoni.

I met Magnus Abe in 2009, at the Nigeria Institute of International Affairs, Lagos. It was at the launch of Prof. David West’s book on Muhammadu Buhari. He was secretary to the government under Amaechi. He had served as Minority Leader under Amaechi too.

I begged him to advise Amaechi to settle with Odili. He said efforts were on going. Let the committee continue from here.