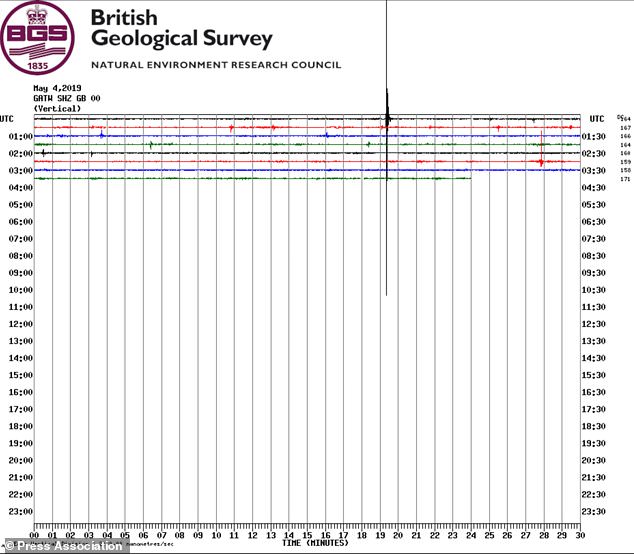 Panicked residents in Surrey have been woken up by buildings “violently shaking” after an earthquake struck near Gatwick Airport.

Loud bangs and rumbles were reported in Crawley, Leigh, and Horley shortly after 1am today.

Dozens of locals have taken to social media to say that they felt their “whole house shaking”.

Michaela Butt tweeted: “Another tremor in Leigh at 1.20am. Becoming a regular thing round here! Solid stone house shaking again.”

Robin Fitton tweeted: “Earthquake in Crawley about 1.19am shook my house and had a cup rattling. #tremors.”

Another social media user tweeted: “First time I’ve experienced an earthquake of such. Dispite being a pretty audible loud bang and shake.

It comes months after a series of earthquakes ranging from magnitude 2.4 to 3.3 struck parts of Surrey in February.

One quake was felt by 80 residents in the same part of the UK where a “swarm” of tremors hit last summer. – prompting warnings that more could be in store.

At the time, Seismologist Davie Galloway said the tremors were part of a “natural earthquake” and “not linked to fracking or any other similar activity”.

Last year special monitoring equipment was installed to better understand what is happening beneath the surface of the area after 15 tremors were felt between April 1 to October 9.

Mr Galloway warned: “It could be the start of another swarm, or it may just be a single event. Time will tell.

“With the past cluster or swarm we put it down to natural seismicity. We live on a dynamic planet.

“Plates move about all the time. They’re bashing and moving away from each other.”

He said the UK was not on the edge of a plate so did not get hit by huge quakes, but stresses could still affect the rocks.

There are roughly 200-300 earthquakes in Britain every year, but the vast majority are so small that no one notices them. However between 20-30 are over 2.0 magnitude which can be felt over a wider area.

UK earthquakes, particularly in Scotland, are most often attributed to glacial rebound.

Residents in Surrey have been woken up by buildings ‘violently shaking’ after an earthquake struck near Gatwick Airport .