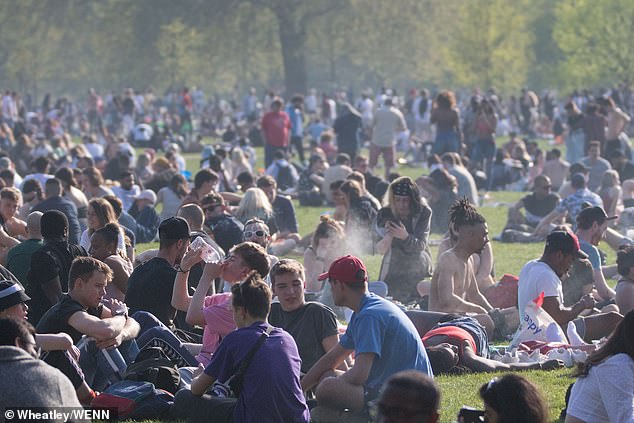 A man in his 20s is fighting for his life in hospital after being stabbed in Hyde Park this afternoon.

Police officers were called to a fight in the western park of the popular green space in central London at around 4.40pm.

It is not known if the stabbing is linked to the 420 pro-cannabis party going on in the area.

Popularised in the US, 4/20, or April 20, is a day that sees cannabis smokers celebrate the drug.

More than 30,000 people are expected to congregate in Hyde Park for the event, which is against the unjust laws surrounding the use and possession of cannabis in the UK.

The fight happened just 20 minutes after the peak of the party at 4.20pm.

A Met Police spokesperson said: ‘Police were called at around 1640hrs on Saturday, 20 April, to a fight in the western part of Hyde Park, W1.

‘Officers attended along with LAS and found a man suffering a suspected stab injury. The man, believed to be aged in his 20s, has been taken to hospital.

His condition is being treated as potentially life-threatening at this stage. We await a further assessment.

‘Detectives from the Central West Command Unit are investigating. There has been no arrest.’