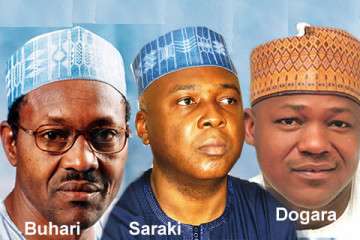 President Muhammadu Buhari has said he rated the Senate President, Bukola Saraki and Speaker of the House of Representatives, Yakubu Dogara very low in terms of patriotism.

Buhari, who said he passed a vote of no confidence on the leadership of the National Assembly, said they hurt Nigerians by delaying the enactment of 2019 budget.

He stated this during an interview broadcast on Nigerian Television Authority, NTA, and monitored by DAILY POST on Monday night.

The President disclosed that he had conveyed his reservation directly to the legislative leaders, while assenting the bill on Monday morning.

According to Buhari: “I think a culture was developed in the National Assembly that they should dictate the terms, which was wrong. It is the executive that dictates the terms and takes it before the legislature. It (the legislature) will examine it and agree or disagree with it.

“But when they go around posing that they are the government and not the executive, then that’s the problem. I felt and I spoke personally to the Senate President, Saraki, and the leader of the House, Dogara. They could not deny it.

“I asked them how they felt to hold the country at ransom for seven months without passing a budget. Unfortunately, they were not hurting me; they were hurting the country. So, really, in terms of patriotism, I think I rated them very low indeed.

“But to hold a budget for seven months cannot be justified if you really bother about the country.”