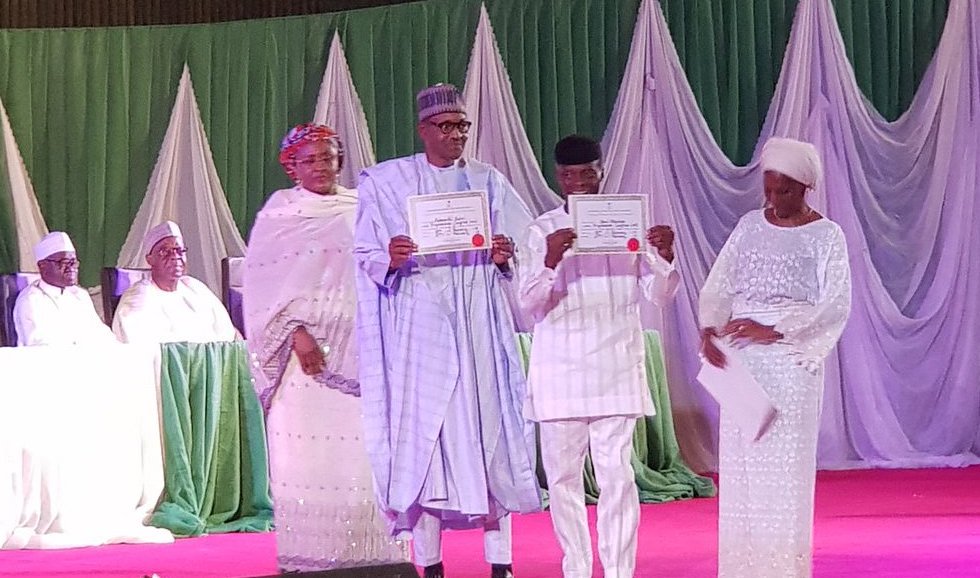 President Muhammadu Buhari and Vice-President Yemi Osinbajo received their asset declaration forms from the Code of Conduct Bureau on Monday, about 24 hours to the deadline on the submission of their declared assets.

The Chairman of the CCB, Prof. Muhammed Isah, presented the forms to Buhari and Osinbajo at a short ceremony at the Presidential Villa, Abuja.

Isah was at the Villa in company with some board members, including Mr Murtala Kankia and Dr Emmanuel Atta.

Buhari, Osinbajo and all political office holders are required by law to declare their assets prior to assuming office.

The CCB cited the legal requirements on Monday as they presented the forms to them.

The chairman said, “Mr President, as part of the constitutional requirements, there is need for every public officer – President, Vice-President, minister, members of the National Assembly – to swear in his assets declaration and liabilities in compliance with Paragraph 11, sub 1 of Part 1 of Fifth Schedule to the constitution.

“Mr President, it is in view of this that we found it pertinent to present ourselves and also present forms to Mr President and the Vice-President for end of tenure and beginning of new tenure in office.

“The forms are readily here with us for presentation.”

Buhari, in a response, said he would speedily fill his form and submit same to the CCB in record time.

However, he asked the bureau to keep his form safely as he was sure that many people planning to come after him in 2023, would go for the form to use information against him.

Buhari noted that among such persons were those who had been caught by his anti-corruption war.

The President said, “I assure you I will quickly fill this form and dispatch it back to you so that at the end of 2023, I believe there are a lot of people that will like to get back at me.

“So, please, make sure you keep it safely because there are people who believe they shouldn’t be questioned, which they are being questioned and some of them are already in trouble.

“I expect them to fight back and this is one of the instruments. So, I hope you will keep it when I finish.“

He also had kind words for the CCB chairman, whom he said he was meeting for the first time after his appointment.

The Attorney-General of the Federation and Minister of Justice, Mr Abubakar Malami, and some senior government officials witnessed the event.

The PUNCH recalls that Buhari in 2015, through a statement by his Senior Special Assistant on Media and Publicity, Mr Garba Shehu, mentioned the assets he had declared at the CCB before assuming office.

On the list released in September, 2015, Buhari stated that he had N30m in his bank account before he assumed office in May of that year.

In addition to owning 270 cows, 25 sheep, five horses, birds and economic trees, there were five houses in Kaduna, Daura, Kano and Abuja. He said the Daura houses were made of “mud.”

He also owned a plot of land each in Port Harcourt and Kano; farms, an orchard and some cars.

For Osinbajo, the Presidency stated that he had, “A bank balance of about N94m and $900,000 in his bank accounts.”