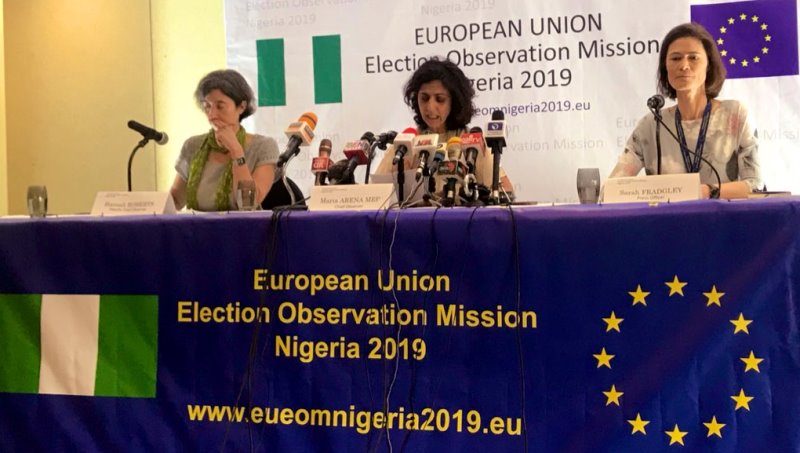 The European Union Election Observation Mission (EU EOM) in Nigeria’s 2019 election, has stated that Nigeria has made significant improvements from previous elections in the country.

The EU Election Observation Mission led by Marie Arena, its Chief Observer, while presenting its final report with recommendations for electoral reform at Transcorp Hilton on Saturday, and reacting to questions from journalists, highlighted that lots of recommendations the Observation Mission had made in 2015 had been addressed by the current administration in the 2019 elections.

The European Union Election Observation Mission in Nigeria had since 1999 observed all general elections in Nigeria. Previous reports had highlighted serious issues with the electoral processes in the country.

In 2003 the EU Election Observation Mission had stated in its final report that the elections held by former President Olusegun Obasanjo were “marred by serious irregularities and frauds. In a number of States the minimum standards for democratic elections were not met. EU EOM observers witnessed and obtained evidence of widespread electoral fraud …”

In 2015, the European Union Election Observation Mission had stated that the highly competitive elections were marred by incidents of violence, abuse of incumbency at state and federal levels, and attempts at manipulation.

The final report had made 7 priority recommendations which included the development and maintenance of a more robust voter registration process, the merger of the accreditation and voting processes for ease for voters, amendment of the constitution for independent candidacy, strengthening of the NBC as a regulatory authority, among others.

Marie Arena had stated while answering questions from journalists during the presentation, that Nigeria had addressed some of the priority recommendations and most of the general recommendations from the 2015 Election Observer Mission’s Final Report.

Some of the prominent items that were recommended and have been implemented are the development and maintenance of a functional voter register, the merger of the accreditation and voting processes for ease for voters, improving the sanction powers of INEC, increasing the number of polling units, immediate display of results in collation centres, more involved participation of civil society and citizen observation among others.

The EU Electoral Observation Mission was invited by the Independent National Electoral Commission to observe the elections from the 5th of January to the 7th of April 2019.

The Mission had 91 observers in 20 locations and visited all states in the country to finalise its report.

Its report has however been criticised by Nigeria’s prominent activist and senior lawyer, Festus Keyamo SAN for not coming to a definite conclusion on the entire elections, as it focused only on the anomalies from a small representation of the whole.

In an interview granted to journalists after the report was presented Festus Keyamo SAN had stated that “the results reflected the overall wishes of Nigerians.

That was the report of so many observers. If you are an observer you should come to a definite conclusion.” He stated.