Russian Plane Explodes Into Flames And Crash Lands At Moscow Airport, Kills 13 Including Two children With 78 On Board 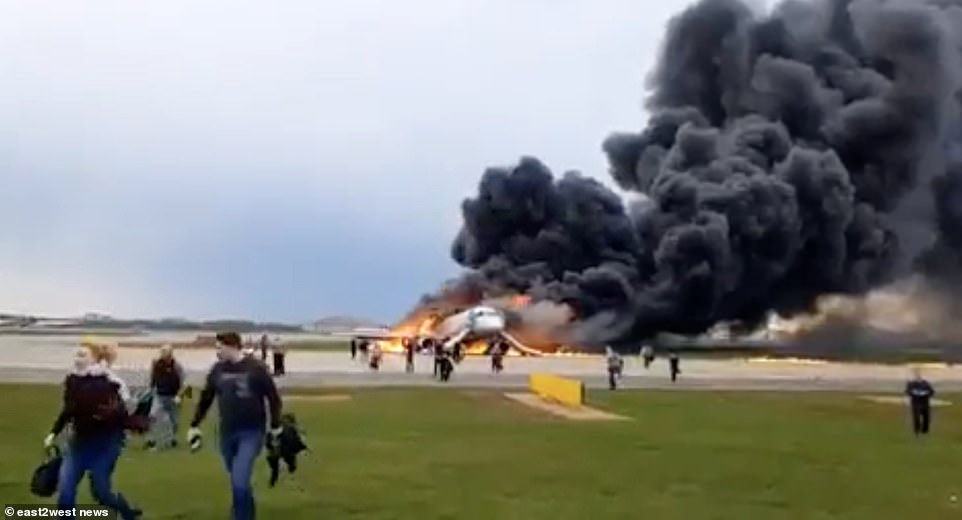 At least thirteen people were killed when a Russian plane exploded into flames mid-air as it made an emergency landing at Moscow’s main international airport.

Two children are among those confirmed dead following the inferno on the Sukhoi Superjet at Sheremetyevo airport on Sunday, the Russian Investigative Committee said.

Terrified passengers were seen fleeing the Russian national carrier Aeroflot plane as flames flared from the rear of the aircraft with 78 on board.

The Russian-built aircraft made an emergency landing soon after take-off from Russia’s capital to the Arctic city of Murmansk.

An airport official said that ‘many passengers delayed emergency evacuation – because against all instructions – they were picking up hand luggage from overhead compartments.’

Initial indications suggest an electrical fault might have caused the fire while the plane was in the air.

Interfax agency reported that the plane, a Russian-made Superjet-100, had just taken off from Sheremetyevo airport on a domestic route when the crew issued a distress signal.

‘It attempted an emergency landing but did not succeed the first time, and on the second time the landing gear hit (the ground), then the nose did, and it caught fire,’ a source said.

It reported that the tail was completely burned and said a rescue team was trying to find survivors in that part of the plane.

Ambulances were sent to the scene of the landing and the passengers were evacuated, with the airport now closed for arrivals and departures.

Interfax agency reported that the plane, a Russian-made Superjet-100, had just taken off from Sheremetyevo airport on a domestic route when the crew issued a distress signal.

‘It attempted an emergency landing but did not succeed the first time, and on the second time the landing gear hit (the ground), then the nose did, and it caught fire,’ a source said.

It reported that the tail was completely burned and said a rescue team was trying to find survivors in that part of the plane.

Ambulances were sent to the scene of the landing and the passengers were evacuated, with the airport now closed for arrivals and departures.

However, there were local reports of emergency services being refused access to the scene with paramedics held at checkpoints for up to seven minutes.

The airline said the number of victims was ‘being specified’ and that emergency medical care was being provided to the injured.

Footage showed a column of smoke towering over the plane. Other images showed the aircraft on fire as it attempted to land, then distraught passengers leaving by a forward door.

Video captured passengers leaping from the plane onto an inflatable slide from the front of the aircraft and staggering across tarmac and grass of the airport.

The stricken plane was clearly visible from the main terminals at the airport in the north of Moscow and a British Airways plane could be seen on the tarmac alongside it.

The crash landing was on the aircraft’s second approach for an emergency landing. The plane had registration number RA-89098

An emergency service car is parked at the entrance of Sheremetyevo airport in Moscow, Russia, on Sunday evening

I managed to jump out. This was the 17.50 Moscow to Murmansk flight. Definitely not everyone managed to escape, huge condolences to families and friends.’

The plane is less than two-years-old. Its first flight was reported to be in June 2017.

Criminal investigators are examining the cause of the crash amid reports that an electrical fault had caused the inferno after take-off.

Other local reports suggest the plane had suffered ‘communications problems’ and the fire engulfed the Sukhoi as it returned to Moscow to land. There were also suggests that the plane had been hit by lightning, although there was no official confirmation.

Several flights have been diverted to other Moscow airports or Nizhny Novgorod, some 500 kilometres (310 miles) east of the Russian capital.

The plane had registration number RA-89098. Flightradar24 tracking service showed that it made two circles around Moscow and landed after about 45 minutes.

How Far Does £1,000,000 Go in Retirement?Fisher Investments UK | eBookPaul Hogan Is Almost 79 & How He Lives Now Will Make You Especially SadDirect HealthyThis Brilliant App Finds Every Discount Code on the InternetHoney  Sponsored Links Man buys a russian tank off eBay, then he looks insideeasyvoyageGas & Electricity Deals | Save Up To £447 On Your Bill Today!Gas & Electricity | Search Ads  Sponsored Links ‘He ruined my life’: Royal Marine reveals how he had his car attacked and was abused in the street after stranger stole his online ID to send explicit pictures to horrified womenNewsThe bluebells worth a million pounds: Owner of beautiful wood raises seven figures for charity by charging nature lovers to see stunning spring displaysNewsDriver ‘kills 52-year-old pedestrian’ by ramming into him after row in the street in London’s 44th murder so far this year NewsAnne Hegerty is So Skinny Now and Looks Gorgeous! (Photos)WeightLossGrooveAfter Bride Found Out Her Fiancé Cheated, She Got Revenge In Front Of All Their Wedding GuestsNoteabley  Sponsored Links Good Samaritans who bought a homeless beggar a £400 caravan say he has ‘totally taken the mick’ out of them after he vanished and left it wreckedNewsThat sinking feeling! Unlucky owner’s £60,000 Mercedes is submerged by the tide after getting stuck in the sand on a north Wales beach while he tried to rescue his boat from the seaNewsLittle nipper! Baby girl shocks her mother after being born with two front teeth NewsThe Most Beautiful Woodstock 1969 Photos Ever CapturedDomesticatedCompanionWhat Are the Top British Classic Cars Really Worth?Investing.comThere Are 7 Types of English Surnames — Which One Is Yours?Ancestry  Sponsored Links

By posting your comment you agree to our house rules.Submit CommentClearElephant Man’s grave is found after 130 years: Author says she has uncovered the final resting place of Joseph Merrick, the Victorian man with deformities who rose to London high society NewsStacey Dooley and Kevin Clifton PICTURE EXCLUSIVE: Beaming couple look smitten as they make their first public appearance together since confirming romanceTV&ShowbizShoppers take part in open-air yoga classes and play giant chess on the streets as Edinburgh bans all vehicles from the city centre in a crackdown on pollutionNewsNow that’s a catwalk! Fashionable feline gatecrashes the Christian Dior runway in Morocco before marking its territory on a guest’s ball gownNewsSchools ‘should fine parents who swear at teachers, skip parents’ evenings and fail to enforce their children’s detentions’NewsThe Cost Of A Luxury African Safari Might Surprise YouLuxury African Safari | Search AdsPlay this Game for 1 Minute and see why everyone is addictedDesert OrderHalifax Refunding £3 Billion [Check For Your Name]The Claims Geek  Sponsored Links Ugly scenes as Newcastle United and Liverpool fans fight in the streets in violent skirmishes after the Reds’ last-gasp winnerNews‘Kamikaze stuff’: Pilots and aviation experts slam Boeing 737 over crashes that killed 346 – and say new plane has a hidden control systemNewsQueen are now richer than THE Queen: Success of Bohemian Rhapsody film sees Freddie Mercury’s surviving bandmates valued at £445m (which is £75m more than the monarch)NewsBrian May’s Mansion Is Anything But ModestTherapy JokerYou’ve Only Got Months To Reclaim Your PPI – Check For Your NameReclaim PPI  Sponsored Links