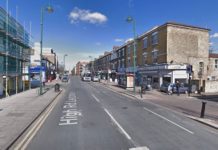 Police have launched a murder probe after a car “deliberately mowed down” two men, killing one in East London.

A 52-year-old man died in hospital this evening after reports of a car ploughing into the pedestrians at 12.40am on Sunday morning.

A second victim aged 32 remains in hospital with serious injuries. His condition is not critical.

The Metropolitan Police say there was a fight on Leystonstone High Road shortly before the smash.

“At this early stage, it is appears that this was a deliberate act by the driver of the car,” said Detective Chief Inspector Mark Wrigley.

“There had been an altercation in the street prior to this incident and I am appealing for any witnesses or anyone with information who has not yet come forward, to contact police.”

2019-05-05
Previous Post: Honda Launches First Unit Of HR-V Assembled In Nigeria
Next Post: Russian Plane Explodes Into Flames And Crash Lands At Moscow Airport, Kills 13 Including Two children With 78 On Board