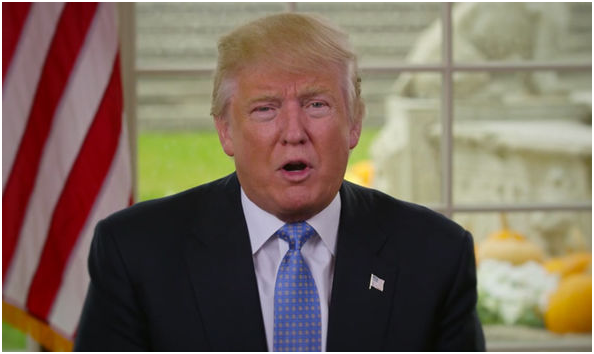 President Donald Trump visited the U.S.-Mexico border in Calexico, California, Friday and touted the effectiveness of a recently renovated stretch of border fence, calling it “better, faster and less expensive,” than the portion of fence it replaced.

The president flew into Naval Air Facility El Centro aboard Air Force One and was greeted to cheers from border patrol agents, military troops and their families before boarding a motorcade en route to the border town.

Department of Homeland Security (DHS) Secretary Kirstjen Nielsen was the first to greet the president and traveled with him south to Calexico, where he will tour a 2.25-mile section of recently renovated border fence

Trump was joined for a quick media briefing by law enforcement agency officials from border jurisdictions from San Diego to Arizona.

Trump repeated previous claims that San Diegans were “begging me for a wall.”

“We’re very appreciative of this wall. These men and women out here in the area of two miles were experiencing a high number of assaults and use-of-force incidents. This was prior to this wall being built,”  El Centro Sector CBP Chief Gloria Chavez said.

Chavez said the see-through design of the new fence gives agents a huge advantage because they can now see what’s on the other side.

Chavez said agents would have rocks and other items thrown at them on a daily basis, but those threats have stopped since the new fence was erected. According to Chavez, assaults on agents have dropped 65 percent in that two-mile stretch and illegal entries have decreased by 75 percent.

Trump said the majority of breaches in the area happen at points along the border still lined with the old fence. When the entire area is lined with the new style fence, he predicted illegal entries in Chavez’s area would be down 99.9 percent.

Three sheriffs from counties in California’s central valley were also at the briefing, saying they feel the impact of porous border defense from 400 miles away.

“I just want to take this opportunity to thank this president for doing the right thing and standing up for law enforcement in this country. It is greatly appreciated,” Kern County Sheriff Donny Youngblood said.

Trump criticized political leaders in California, and in San Diego, for their apparent complaints regarding Trump’s border barrier project.

“Its interesting about California, they’re begging me for the wall in San Diego, you know that, because the people were pouring in through San Diego, going over the front lawns, going into people’s houses, so they want the wall done in San Diego, and we did it and then you hear they don’t want the wall; they want the wall. If you ever took it down, they wanted that one so badly, and we did it, we did a great job. We stopped everybody, virtually everybody – actually, everybody from coming over. It was a tremendous success but California is always the first one to complain.”

Sherrif representatives from Arizona who joined the president also thanked him for his commitment to border security, and said they neutralize threats from the other side of the southern border every day.

“Anyone who would suggest that we do not have a crisis on our southern border is being intellectually dishonest to the point of being dishonest with malice. We have a humanitarian crisis which is very clear and compelling, we have a compelling crisis of public safety with human trafficking, drug trafficking, sex trafficking coming through the border. This is not make believe, this is something that we live with every day as border sheriffs, so we applaud the efforts of the current administration to secure our border,” Pima County Sheriff Mark D. Napier said.

Ahead of the tour, the president first sat down for a roundtable with U.S. Customs and Border Patrol and Department of Homeland Security officials. CBP Chief Chavez said that the renovated section of wall accounted for a drop in illegal entries by 75 percent in fiscal year 19.

“We need the border barrier, we need to provide the requirements that meet our need, in this case for us its 30 feet high,” Chavez said. “That’s what we asked for and that’s what was provided, so thank you on behalf of the border patrol here for allowing that to happen.”

With the renovation, the section became the tallest border barrier along the southern United States, standing at 30 feet tall, according to Chavez.

The White House says it’s the first section of his proposed border wall to be built, though the repairs were made with 2018 appropriations as part of a long-planned replacement project, and was in construction from Feb. to Oct. 2018.

“There is indeed an emergency on our southern border,” Trump said at the briefing, adding that there has been a sharp uptick in illegal crossings. “It’s a colossal surge, and it’s overwhelming our immigration system. We can’t take you anymore. Our country is full.”

Meanwhile, both protesters and supporters gathered at the Gran Plaza Outlets next to the Calexico Port of Entry in anticipation of Trump’s arrival. Nearby, the barbed wire fence separating the two countries was lined with Department of Homeland Security vehicles.

Protesters floated next to the port a 20-foot tall balloon of a cartoonish Trump wearing a diaper, hopeful that the president’s motorcade would pass the giant inflatable while en route to the border.

“We hope our words – our real worries – are heard. And we can reach a solution,” said protester and Calexico resident Maria Surtado.

Trump supporter and El Centro resident Omar Vega positioned himself next to the baby Trump balloon and alongside protesters to represent the other side, he told NBC 7. Vega is hopeful that the president can make change along the border.

“Hopefully he actually does something productive today, and hopefully helps the economy, in this city, right now,” Vega said. “With building the wall, hopefully the crime rate goes down, especially in this city, because it’s very bad right now.”

Press Secretary Sarah Huckabee Sanders said Thursday that during President Trump’s visit to the border city, he will be briefed by U.S. Customs and Border Protection officials on “exactly what is taking place at the border.”

“He’s going to get a briefing when he first arrives there from a number of law enforcement officials, the CBP folks the people that are on the front lines there on the ground,” she told Fox News.

The president has threatened to close the southern border if demands to curb illegal immigration and drug trafficking are not met. On Thursday, the President walked back the immediate threat to close the border and instead said the closure could come next year if the Mexican government or Congress does not make significant progress on both issues. Trump also said he would slap tariffs on Mexican automotive imports at that time.

The possibility of a border shutdown was first made last Friday due to a surge of Central Americans migrants who are seeking asylum in the U.S. Trump administration officials have said the influx is straining the immigration system to the breaking point.

While Vega is in favor of Trump’s border wall plan, he admits shutting down the border wouldn’t be good for El Centro because the city’s economy relies on people crossing over the border to spend money, he explained.

“This is certainly not the president’s first choice but Democrats at this point, they’re unwillingness to do anything has left the president with very little options. Thankfully Mexico has stepped up over the last few days,” Sanders said.

When asked what Mexico has done, the press secretary said they’ve added additional checkpoints within the country to stop migrants before they reach the U.S. border. Second, Mexico increased to 300 the number of asylum-seeking individuals allowed to be sent back to Mexico as part of a new U.S. policy.

Mexico’s cooperation with U.S. officials last December marked a historic one as the country has traditionally refused to accept into their country the return of any migrants who are not Mexican.

Elected leaders from border communities stretching from San Diego to cities across Texas warned that havoc would ensue on both sides of the international boundary if the ports were closed. They were joined by the U.S. Chamber of Commerce, which said such a step would inflict “severe economic harm.”

The San Diego and Imperial County chapter of the American Civil Liberties Union released a statement Friday voicing concerns that the president was not meeting with civilians of the border communities.

The statement read in part, “To our knowledge, the president has no plans to meet with Imperial Valley residents or community leaders to hear their concerns. He has no intent to learn how his policies strain limited local resources and put lives at risk. He is unmoved by the harmful effects his threats to close the border has on businesses, families and civic life in the region.”

Calexico, part of Imperial County, is home to the second busiest commercial port on the California border and processes tens of thousands of vehicles daily.

Also on Friday, House Democrats filed a lawsuit preventing Trump from spending more money than Congress has approved to erect barriers along the southwestern border. Congress approved just under $1.4 billion for work on border barricades. Trump has asserted he can use his powers as chief executive to transfer an additional $6.7 billion to wall construction.