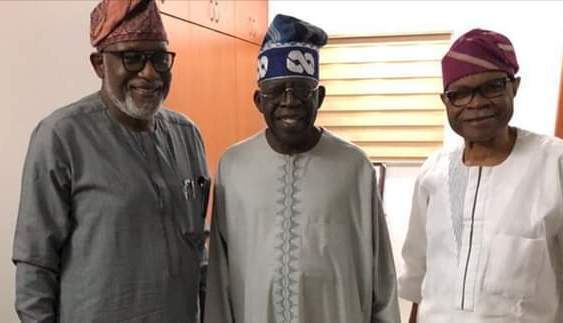 The political differences between former Lagos governor, Bola Tinubu, and the governor of Ondo State, Rotimi Akredolu, appears to be coming to an end following a peace meeting between the duo in Abuja on Sunday.

Both politicians travelled parallel paths after the 2012 governorship election in the state when Mr Akeredolu was the candidate of the Action Congress of Nigeria (ACN). He lost the election to the Labour Party’s Olusegun Mimiko.

The bitterness became pronounced during the struggle for the APC ticket for the 2016 governorship election. Mr Tinubu, a national leader of the party, handpicked Segun Abraham, who won the ticket against the interest of Mr Akeredolu.

When Mr Akeredolu eventually defeated Mr Abraham and Olusola Oke to become the APC flagbearer, Mr Tinubu reportedly sponsored Mr Oke on the platform of Alliance for Democracy for the election proper.

Mr Akeredolu, a Senior Advocate of Nigeria, still triumphed at the polls to the irritation of Mr Tinubu and his associates in Ondo State.

Mr Tinubu however, had his pound of flesh in the build up to the 2019 general elections, when he ensured, with the backing of the APC NWC that Mr Akeredolu was denied the privilege of having his men fielded for the National Assembly and state Houses of Assembly elections.

The development resulted in what is now tagged “anti party activities,” where the governor had tacitly supported some of his favorites to contest the elections on the platform of the Action Alliance, (AA).

The said peace meeting between Messrs Akeredolu and Tinubu is coming a week after the rumoured suspension of the governor by the NWC for his role in the last general election which allegedly cost the APC the presidential election in the state.

Premium Times reliably gathered that besides the meeting in Abuja, a series of meetings have been planned for Ondo State to further douse all tension.

Although a close aide to the governor, who spoke in confidence with Premium Times on the matter, made efforts to dissociate the recent peace moves from the governor’s reelection ambition come 2020, feelers indicate that the rapprochement has become essential to the race.

The Tinubu group led by a former deputy governor, Ali Olanusi, and supported by Isaac Kekemeke, who was the former state chairman of the party, had called on the NWC to ensure that Mr Akeredolu was denied the party’s ticket for a second term for his alleged “anti party activities” during the last general elections.

An aide to Mr Akeredolu, who would not want to be named, said the first phase of the agreements was for “media aides to the parties to cease fire and maintain the peace.”

He said all the parties are interested in ending the feud and want peace to reign.

“As I speak with you, other meetings will be held in Ondo State, so that other players within the state would be actively involved in the peace moves,” he said.

It was gathered that the reconciliatory meeting was initiated by a former APC national vice chairman South-west, Pius Akinyelure, who had made several attempts to bring the duo together.

He got his opportunity late last week when Mr Akeredolu flew to Abuja to honour Mr Akinyelure’s invitation to meet with the former Lagos governor.

Although the details of the meeting were still shrouded in secrecy, it was gathered that both men expressed their grievances and resolved to work together in the overall interest of the party particularly in Ondo State.

Meanwhile, the governor’s Special Assistant on New Media, Allen Sowore, confirmed the reconciliatory meeting, adding that “peace had been achieved between the two leaders.”

Tunde Rahman, media aide to Mr Tinubu, also confirmed the meeting but refused to give details.

“You have seen the picture of Asiwaju, the governor and the former Vice Chairman, South-west and you know pictures don’t lie and that means the meeting held,” Mr Rahman said.