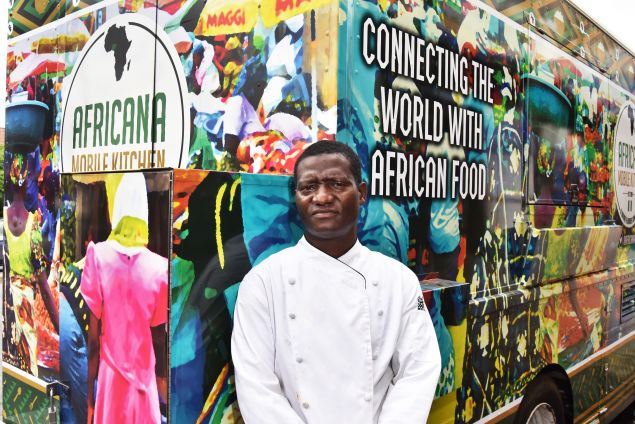 Parked in front of Manhattan’s Nigerian consulate, during a blizzard or heat wave, is the intrepid Divine Flavored Food Truck selling home-cooked Nigerian food. Customers line up at the window to order jollof rice with goat, gizzdodo (chicken gizzard with plantain cooked in fresh thyme and curry), or a pureed red bean called moimoi, among other traditional Nigerian dishes.

The man commandeering the truck is Godshelter Oluwalogbon, who first arrived in New York City in 2001. He simultaneously listens to lunch orders over his cell, ladles rich stews on to rice in to-go dishes, wraps aluminum foil over deep fried puff-puff dough balls, manages employees and takes orders from the truck’s customers, sometimes in Yoruba.

Oluwalogbon began his food business part-time in 2005, catering on the weekends while working at Zabar’s and full-time in 2010, when he also began to sell his food on 2nd Avenue in front of the Nigerian consulate, initially out of a minivan. He eventually bought and refurbished a Caribbean food truck; his prized second truck, decorated with marketplace scenes, is currently awaiting city inspection and should be hitting the streets within a month.

When Oluwalogbon is not working the truck, often with his wife, Bisola, and several employees, he’s cooking in his Brooklyn kitchen, located along an industrial strip of Atlantic Avenue amid restaurant equipment supply stores. It had been a Nigerian restaurant of sorts, “not really open to the public,” as Oluwalogbon puts it, until he bought out the owners.

Inside the kitchen, Oluwalogbon preps 300 pounds of goat meat for the truck and an upcoming wedding. As two enormous vats of stewing goat infused the kitchen with curry, fresh thyme, bay leaf and garlic, Oluwalogbon explained how he went from a Zabar’s employee to a food truck entrepreneur, how winning the Critics Choice Vendy Award in 2017 impacted his business and what it takes to survive as a food truck owner.

Were you cooking before you immigrated to the U.S.?
I worked as a waiter in Nigeria at the age of 15, 16 years old. I became a kitchen assistant; my desire and love for the hospitality industry has continued.

After you arrived in the U.S. in 2001, where did you work?
I worked at Zabar’s, on 80th Street and Broadway, for 10 years, it was a golden opportunity. Over time, I saw everything they did, including shipping food across the country and thought, I could do this for Nigerian food.

At one point, I was trying to look for another job while working at Zabar’s, just so I could get more money, but my boss, Chef Boris, told me, “No, don’t look for another job, go to school.” I listened to him. I went to culinary school at the Art Institute of New York, and he gave me a little raise, which really helped. At one point, I was working at Zabar’s in the morning, and at night, LSG Sky Chefs at the airport or a nursing home facility in the Bronx as a dietary supervisor.

How did you transition into catering and the food truck?
I nursed the plan for three years before I made the decision to do it. I wanted to make sure it was the right time, and then I launched it. I used savings and eventually the revenue from the business. It’s all self-run.

Was it scary to leave a job and launch a business?
It wasn’t scary, I mean, I was ready mentally. I knew everything in life takes time to build. When I took over this kitchen, I started fixing it up, buying equipment, which was stressful because it’s a lot of money. All the revenue coming in, I invested here.

Who are your food truck customers?
In terms of nationality, I would say, 75 percent are Nigerians, the rest are mixed from all over the world. Many non-Nigerians come here—a lot of white folks come here, Chinese people—someone from Germany heard about the truck.

The food is not crazily spicy. Nigerian food, or African food, is known for its spiciness, but I was able to balance that out. We have additional spice if people want it extra spicy.

You’ve always parked your truck in the same spot in front of the Nigerian consulate. How does that work with other food trucks who might want that spot too, the honor system?
You just have to wake up early. In the food truck industry, we have a lot of respect for one another. Before anyone would put a truck there, they would have scouted multiple times. But, technically, it’s a city space; I can’t tell anyone to move if they park there. If I want my truck there, I have to be early, that’s it.

I’ve heard it’s difficult to get a food truck permit, did you have trouble?
The vending license is easy to get, but the permit, the one on the truck, is difficult; you need both. When we got the truck, it came with a permit.

In 2017, you won a Vendy Award, the annual street food competition held on Governors Island—I can’t believe this is the last year.
We won in 2017. It was awesome! That was phenomenal. The Vendy Award was so great and it helped us a lot. It gave us publicity, a lot of popularity; everybody wanted to interview us, it was a blessing. Our customer engagement went up.

You’ve embraced technology, customers can order food via Grubhub and other companies?
Yes, but it’s ridiculous. I sat down and did all the calculations; they are rip-offs. Yes, I will say that a million times! I almost want to cancel it.

They used to make me and the customer pay for the delivery. Let’s say the original price is $15—I have to pay $5 for delivery, and commission, and credit card fee. So what am I left with, $7? Come on!

So far, I’ve been able to catch Grubhub doing that crap, excuse my French, but, this is not right.

Do you like being your own boss?
I’m literally staff here; I work like every other person, the only difference is that I make decisions. I’m not really thrilled about being my own boss, I work seven days a week.

Have you felt any anti-immigrant sentiment with the election of Trump?
No, not at all. If there’s been any opposition, it’s from my own people, not from the people of this country. The Nigerian embassy says my customers eat and mess up the front of the building. Which is not true. At lunch hour, people eat all sorts of food there. They’ve called the cops on us before. So, I’ve had to confront them many times, “You cannot kick me out of here, this belongs to the City of New York.”

How would you advise a young immigrant who is thinking about launching a food truck?
First, if you don’t know how to cook, back off, don’t start it, you are just going to waste your money. The quality of the food is key.

There is a lot of money to be made, but there is a lot of work as well. It’s not an easy business, it’s very demanding and you have to be hands on. The moment you start, it takes all of your life. Now, if you are willing to sacrifice all of these measures, good for you, go for it.

A 22-year-old Nigerian kid from Pennsylvania was reaching out to me recently about starting a food truck business. I said, sure, why not? As long as you are ready to put in the time that it takes, you will make it.