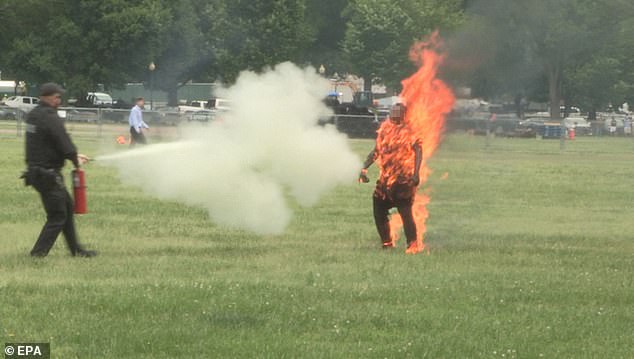 A Man set himself on fire outside the White House before walking across its lawn completely alight.

Emergency services found him engulfed in flames on the Ellipse near the Washington Mall, an area popular with tourists visiting the American capital.

Soon after a large cloud is seen in what appears to be a fire extinguisher being discharged.

The Secret Service has tweeted: “At approximately 12.20pm a man lit himself on fire on the Ellipse near 15th and Constitution Ave, Secret Service personnel are on scene assisting National Park Service)and US Park Police in rendering first aid.”

A spokesman for the Washington Fire Department told CNBC: “I can confirm that we’ve transported one patient with burns from the Ellipse and we’re now on the scene assisting law enforcement.”

One woman, Krisjan Berzin, reported how her daughter saw the drama unfold.

She tweeted: “She just saw a person that was on fire running across the White House lawn.”

Nearby streets have been cordoned off and the man was rushed to hospital.

The man’s condition is not known at this stage.

The Ellipse is a 52-acre park which is south of the White House fence.

It was the second such incident since April 12, where a man in a wheelchair-type electric scooter set himself on fire outside the same fence.