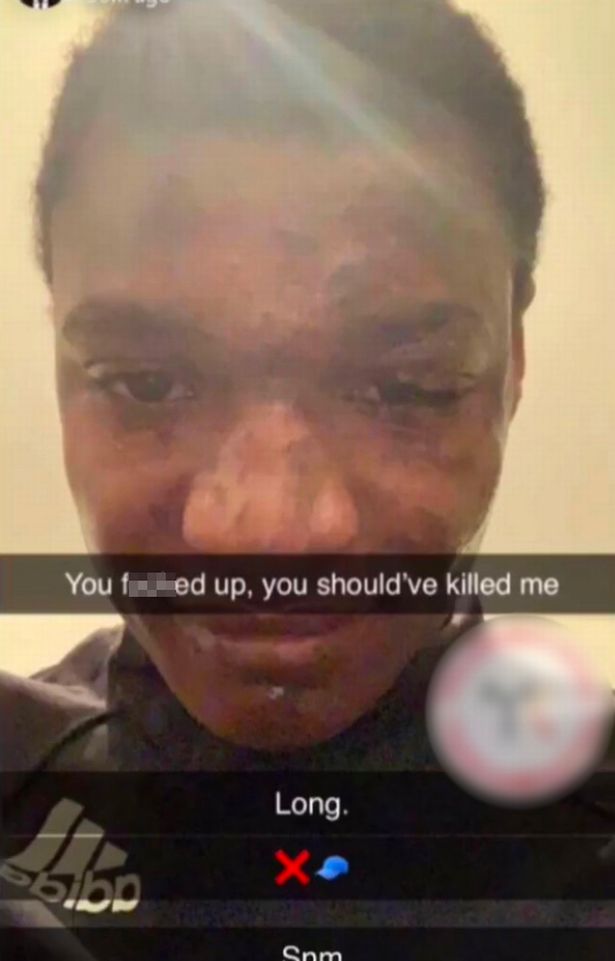 An acid attack victim allegedly took to social media to share a selfie saying the yobs that maimed him ‘should have killed him.’

In the widely shared photo, the man in his 20s can be seen smiling at the camera.

The term “Snm” is a slang abbreviation for “Say no more”.

There are also emojis of a red cross followed by baseball cap in the photograph.

And social media users have claimed the photograph was published by the victim to promise retribution against his attackers.

On Friday evening two hooded men threw corrosive substance at the passengers of a in the sports saloon car which had been been smashed up.

As they hurl the acid at their victims, the thugs are heard shouting “P***YHOLE! P***YHOLE!”

The man pictured on Snapchat is thought to be one of two men rushed to hospitals following the attack in Hackney, east London.

The victims are believed to be in non-life threatening conditions.

A new video, which also emerged yesterday, shows the victims frantically get out of their car and flail around in agony.

The men are seen stripping off their clothes, writhing and screaming in pain before the video cuts to an end.

Witnesses said that a car chase had taken place just before the attack, with one vehicle being driven off the road into a wall.

Met Police are still investigating and have made no arrests.

“Both injured males were taken to east London hospitals where their condition was assessed as non-life threatening.

“Officers from Hackney are investigating.

“No arrests have been made.”