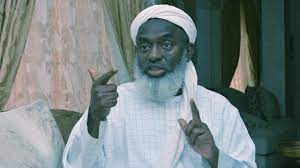 Popular Islamic scholar, Ahmad Gumi has disclosed how the Nigerian government can stop banditry and the crimes among herders.

Gumi said crimes among herders can be stopped through education.

In a Facebook post, the controversial Islamic scholar said the building of schools and encouraging children of herdsmen to attend them would prevent banditry.

Gumi recalled how he encouraged some herdsmen in the Janjala forest of Kagarko to take up education and renounce banditry.

According to Gumi: “It’s Education! In the package it means building schools for them and their children to rehabilitate them and prevent their children from joining the banditry as a way of life; it is called mopping out the pool from which criminals get their foot soldiers.

“Seven months ago, in early February, I was in Janjala forest of Kagarko to visit Herdsmen to encourage them to resist and fight back against the bad eggs among them and also put the foundation stone of a school/center for them.”

Gumi said the herdsmen accepted his offer and a school was erected where their children received lessons.

The cleric said no fewer than 600 students were enrolled for classes.

He added: “Today, with the roofing in place, they have moved into the school even without plaster, electrical fittings, ceilings, tiles, and painting to continue their lessons.

“So far, about 600 students were enrolled out of which 150 are married women.

“This is how a society is transformed and redirected.

“They have now tested the sweetness of knowledge and have seen the value of education. They cannot be recruited any more to commit crimes as they are looking forward to a brighter future of respect and dignity.”

Gumi noted that by erecting such education centres across forests in the states, soon the “bad eggs” will have no ‘justification’ for committing crimes.

“This is a practical example for people to emulate and governments to listen to,” he said.

Some Northern states have been under the attacks of bandits with several schools and religious centres been the target.

States like Zamfara, Niger, Kaduna, Sokoto, Kebbi, and Katsina states have been affected by the activities of banditry.

Amid their activities, Gumi had severally visited bandits in their camps with the aim of urging them to lay down their arms.

Following his visit, Gumi had urged the Federal Government to grant bandits amnesty.

Recently, the Islamic cleric had appealed to the Federal Government to establish a Ministry of Nomadic Affairs.

Gumi said the ministry would address the challenges surrounding herders.

He had pointed out that bandits in the North are going nowhere.

2021-09-16
Previous Post: I Have No Apologies Over My Comment on Buhari –Gov Umahi
Next Post: APC: Jonathan will be allowed to contest in 2023 if he joins our party