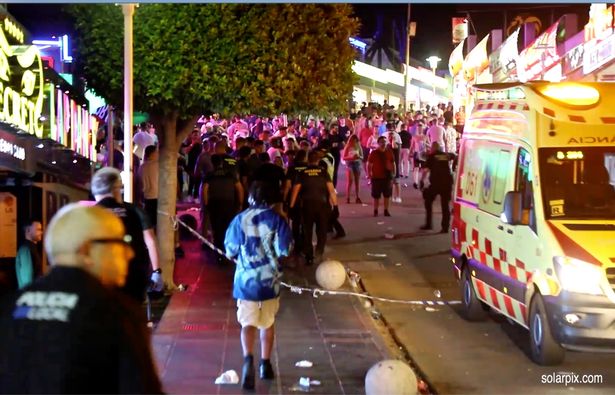 Four Brits have been stabbed during a mass brawl in Magaluf, with a fifth arrested by police.

It happened at about 4.15am this morning in the Punta Ballena area of the popular party resort.

The clash is said to have broken out between the British men and two street vendors who are alleged to have stolen their phones and wallet.

Local media say one of the Brits retaliated and at one stage, a knife was brandished and this led to a “massive fight”.

Other people piled in as the brawl escalated.

An ambulance crew happened to be nearby, according to  CronicaBalear.es  and heard shouting from a nearby street.

“The staff of the ambulance went to the scene but at first could only see lots of people, a lot of blood, and it took them some time to locate the people who required their services,” it reports.

One of the victims had managed to catch his attacker and hold him by the neck and an ambulanceman helped to restrain him until police arrived.

Because of the number of people injured, the ambulance service had to call in reinforcements.

Police say there were five injuries in total, including the alleged attacker. All were taken to Son Espases hospital.

The condition of the four Brits has not been announced but the man being questioned on suspicion of the stabbing is said to be “fair”. He will be arrested as soon as he leaves the hospital.

It is understood none of the Brits are in a life threatening situation.

A full investigation is already underway. This morning, a large amount of blood was clearly visible on the pavement.

Only ten days ago, it was revealed that police were stepping up security in Magaluf after “dozens” of tourists are being singled out and mugged in the street by so-called “mafia” groups.

Eight people of Senegalese origin, aged between 20 and 36, were arrested in the space of just a few hours for robbery on June 10 in the Calvia district, many of them also acting as street vendors.

One tourist needed hospital treatment after defending himself when threatened with a bottle and in another incident, a police officer was injured whilst making an arrest.

The local council says the gangs use the so-called “bear hug” technique or violent shoving.

Working in pairs, one approaches a holidaymaker and gets them in a vice-like grip from behind whilst his accomplice steals personal possessions, including jewellery, mobile phones, wallets and watches.

Another member of the group acts as a look-out.

Police also found a device for the extraction of SIM cards.

The muggings happen late at night or in the early hours of the morning and tourists who appear to be very drunk or affected by drugs are the main targets.

In order to step up security in the area, Civil Guard officers are moving into the Magaluf area and will be based at the municipal tourist information office near the main nightspots.

Local media  Ultimahora.es  says the Punta Ballena area is “a paradise for sub-Saharan mafias” who on one night alone can commit 100 robberies and thefts from tourists.

One businessman said: “They are real specialists in stealing. They do it in a matter of seconds and most victims don’t report it.”

The newspaper says this time last year, the problems were being caused by prostitutes who were robbing tourists.

Now, they are being replaced with street vendors and there there could be up to 70 out at any one time.

“At dawn, the same vendors become expert thieves,” it is alleged.

Locals say the security forces are unable to cope as “there are robberies or fights every moment.”