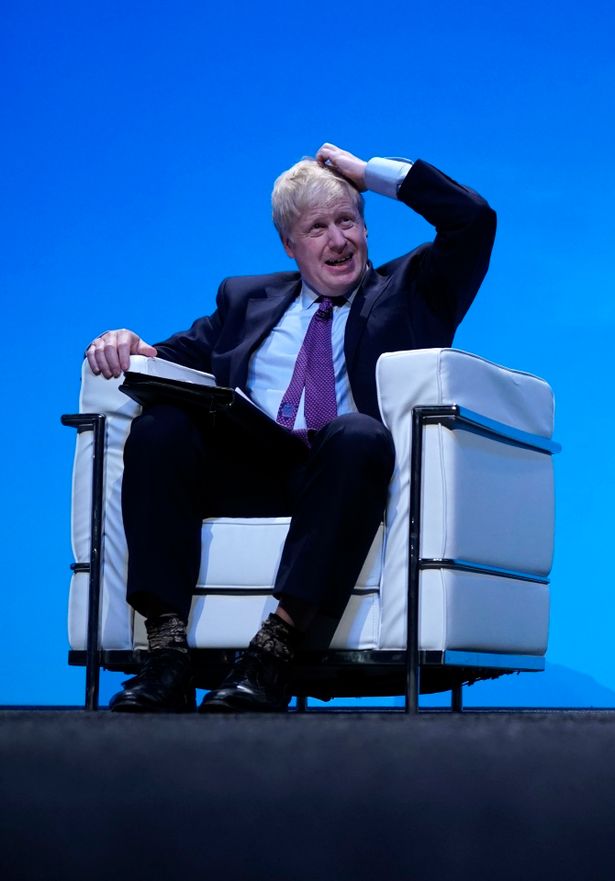 Boris went through a whole TV debate wearing one sock inside out today.

Speaking at the first of the Conservative Party’s election hustings, the would-be Prime Minister, 55, spoke about his policies and plans.

He also dodged questions about police being called to his home last night.

And it appears he was unaware his left sock was inside out.

Photos taken at the event in Birmingham show the wardrobe malfunction.

The speech and interview lasted around 30 minutes but it appears he didn’t notice the blunder – or did many social media users.

There is little reaction on Twitter to the faux pas.

During the debate, the father-of-five spent five minutes avoiding giving reporter Iain Dale a straight answer to questions about why police were at his south London home last night.

Nevertheless, the audience in the second city booed at the journalist and cheered in support of the animated Mr Johnson during the interview.

Mr Johnson grinned and thanked his fans after the first of five questions and insisted the audience “did not want to hear about that kind of thing”.

But Mr Dale put the question to the politician again, to which Mr Johnson rambled about his plans.

In the interview, broadcast live on the Conservative Party’s Facebook page, the reporter highlighted the importance of the public being aware the private life of the candidates.

Yet Mr Johnson waffled again about his “determination and courage,” to which he was applauded by the crowd.

And he finally conceded to would make “no comment” when resilient Mr Dale posed the question to him one last time.

The interrogation took five of the candidate’s 15 minutes’ question section. Mr Dale told Mr Johnson he was “completely avoiding” it.

She tweeted: “Well I find myself with @IainDale again. He’s right to ask questions that are on people’s minds …”

Police were called to reports of a domestic disturbance at the south London home in the small hours of the morning, after neighbours grew alarmed at the volume of the argument.

During the hustings, Mr Johnson also promised to “get Brexit done” and insisted he was the man to “unleash on the project.”

A question from the audience referred to a reception in June 2018 when Mr Johnson is said to have replied “f*** business” when asked about corporate concerns regarding a hard Brexit.

Asked if his attitude towards British jobs is still as “careless” as it was then, Mr Johnson replied: “I bitterly resent the way one stray remark to the Belgian ambassador who was making the case that the UK would not be able to leave the European Union, I don’t think that should be allowed to cloud what is, I think, a pretty extraordinary record as a politician for sticking up for business at every conceivable opportunity.