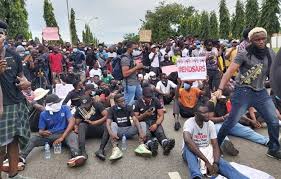 The United States Government may impose a visa restriction on persons found culpable in the shooting of unarmed #EndSARS protesters at the Lekki Toll Plaza in Lagos on Tuesday.

This is just as the judicial panel set up by the Lagos State Government to probe the Lekki killings is set to begin investigation into the incident on Monday.

Soldiers deployed to quell the protests had opened fire on protesters. While the Defence headquarters has denied deploying soldiers in the Lekki Toll Plaza, Governor Babajide Sanwo-Olu insisted the military carried out the shooting on the peaceful protesters at the toll plaza.

Although the casualty figure remains a subject of controversy, global rights group, Amnesty International, says 12 persons were killed in the incident.

According to Punch an email inquiry to the US Foreign Mission to Nigeria on whether those found wanting in the shootings would be banned from visiting the US.

The email enquiry read, “With regard to the shootings at the Lekki toll plaza in Lagos and attack on protesters in various parts of the country, will the United States Government be considering a visa ban on persons found wanting in the last few weeks?”

In its response, the embassy stated, “We stand by Secretary Pompeo’s statement of October 8, 2020: Adherence to these democratic norms and to the rule of law allows all citizens to engage in political dialogue and support their choice of candidates, parties, and platforms.

“We will watch closely the actions of individuals who interfere in the democratic process and will not hesitate to consider consequences – including visa restrictions.”

Earlier, senior officials of the United States Government on Thursday met with Vice-President Yemi Osinbajo and expressed displeasure over the shootings.

Although the Nigerian Army had denied deploying soldiers to the scene, the US officials demanded that the soldiers behind the shootings be brought to justice.

The officials, according to the statement, raised concerns over the ongoing violence in Nigeria as well as human rights violations and human trafficking.

The statement read in part, “Counsellor T. Ulrich Brechbühl met with Nigerian Vice President Yemi Osinbajo today in Abuja, Nigeria as part of a previously scheduled delegation, which included Assistant Secretary Robert Destro and Assistant Secretary Denise Natali, to raise US concerns about ongoing violence in Nigeria, human rights, religious freedom, and trafficking in persons, and to hear from senior Nigerian government officials how they are addressing those issues.

“The counsellor expressed the US condemnation of the use of excessive force by military forces that fired on unarmed demonstrators in Lagos. He expressed condolences to the victims of these shootings and urged the government of Nigeria to abide by its commitment to hold those responsible accountable under the law.”

According to the statement, Osinbajo, as well as the counsellor, noted that the right to peaceful assembly and freedom of expression are essential human rights and core democratic principles.

“Counsellor Brechbühl and Vice-President Osinbajo emphasised the importance of US and Nigerian collaboration on common goals of improving security cooperation and strengthening economic partnership to foster mutual prosperity,” the statement read.

The Nigerian Army had on Wednesday denied that soldiers were at the toll plaza despite eyewitnesses’ accounts and video evidence showing soldiers shooting.

She tweeted, “My office has been closely following the events around the current protests in Nigeria and the reaction of Nigeria’s law enforcement and security agencies.

“Any loss of life or injury is concerning. We have received information alleging crimes and are keeping a close eye on developments, in case violence escalates and any indications arise on that Rome Statute crimes may have been committed.”

However, the President, Major General Muhammadu Buhari (retd.) made no mention of any investigation or arrest during his national broadcast on Thursday.

Retired military generals on Friday condemned the shooting of unarmed protesters by soldiers at the Lekki Toll Plaza. They tasked the investigative panel set up by the state government to bring those indicted to justice.

A former Provost Marshal of the Nigerian Army, Major General Ikpomwen Idada (retd.), faulted the deployment of military men to disperse the protesters, noting that the President should have addressed Nigerians much earlier to douse the tension.

He stated further, “What happened is unfortunate. It is absolutely untenable for military force to be used on protesters exercising their constitutional right to express their views on how they are governed.

“At this level, unless God is on our side, everything is pointing towards chaos. We should never have reached that stage where protesters are shot at.”

He said Nigerians saw videos of people who looked like DSS officials releasing thugs to attack protesters, and that the provocation aggravated the situation, leading to violence.

“Those who are responsible for it should be disciplined. The army denying that it happened makes it necessary for proper and thorough investigation to be done. Everything points to the fact that those who did the shooting were soldiers.”

Also, a former General Officer Commanding, 1st Division, Nigerian Army, Major General Abiodun Role (retd.), said the #EndSARS protest and the resultant violence had shown to those in position of authority that an important segment of Nigeria’s population had woken up to hold them accountable.

“That is not an excuse anyway, if a unit  deploys its men to go and carry out such an action, then whoever is responsible for sending them there should be held responsible.”

On his part, a former Chairman of the Nigerian chapter of Transparency International, Major General Ishola Williams (retd.), condemned the shootings.

In a telephone interview with one of our correspondents on Friday, Williams said, “Any sensible person will condemn the act of soldiers shooting at unarmed protesters. Anywhere in the world, that is condemnable. If you obey an order to shoot at unarmed persons, you have committed murder. Period!”

“Obeying order alone is not enough to absolve the soldiers from the shootings. So, they are as guilty as the person who gave the order.”

He advised that people should wait for the judicial panel of enquiry set up by the governor on the matter, noting that the state’s Neighbourhood Watch and Civil Defence corps should have defended the state and federal buildings from being vandalised by the hoodlums.

Meanwhile, Sanwo-Olu said during a live broadcast on Friday that the seven-member Judicial Panel of Enquiry and Restitution for victims of SARS-related abuses in the state would also investigate the Lekki killings and would resume sitting on Monday.

Sanwo-Olu said, “That same panel headed by retired Justice Doris Okuwobi would also investigate all the issues that happened at the toll plaza on Tuesday. The sitting would start on Monday at the Lagos Court of Arbitration International Centre in Lekki.”

Over 30 human rights groups in Africa under the aegis of Coalition of Human Rights Organisations in Africa have asked the African Commission on Human and Peoples’ Rights to investigate the alleged murder of protesters at Lekki Toll Plaza.

In a statement on Friday tagged ‘Dark Tuesday,’ over 30 human rights groups in West Africa asked the Banjul, The Gambia-based African Commission on Human and Peoples’ Rights to investigate and make recommendations on the alleged killings.

Speaking on behalf of the coalition, the Executive Director, HURIDAC, Ayodele Ameen, condemned the shooting of the protesters, saying that the alleged killings were a violation of the Rome Statute, the African Charter on Human and Peoples’ Rights and the International Covenant on Civil and Political Rights.

The statement partly read, “The Nigerian citizen has a legitimate right to protest under the Nigerian constitution and their Freedom of Expression and Association is enshrined under the Africa Charter on Human and Peoples Rights, which is domestic law in Nigeria.