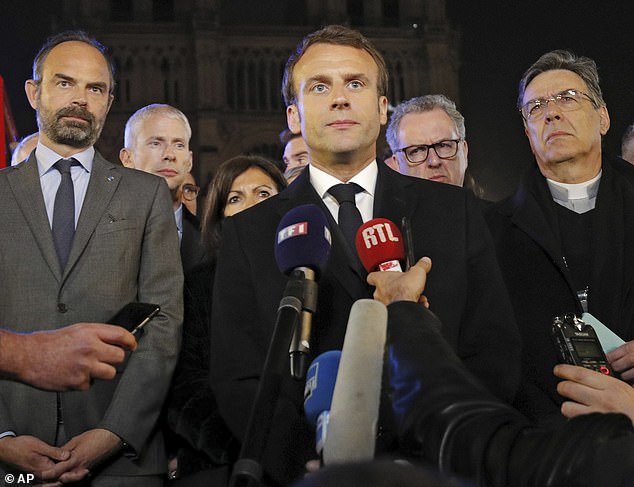 Other heavyweight donors include the Bettencourt family – owners of cosmetics giant L’Oreal – who have given 200 million euros and the French oil giant Total who donated 100 million on Tuesday.

Multi-billionaire Arnault and fashion tycoon Pinault made their generous pledges after President Emmanuel Macron launched an appeal on Monday.

Pinault, who is boss of Kering, said: ‘This tragedy impacts all French people’ and ‘everyone wants to restore life as quickly as possible to this jewel of our heritage.’

This was followed by another 100 million euro donation from multinational oil and gas company Total, which is headquartered in Paris.

CEO Patrick Pouyanne tweeted that Total was making ‘a special donation of 100 million euros’ and added the slogan ‘fluctuat nec mergitur’ (tossed but not sunk), a motto on the old Paris coat of arms.

But, in a statement, the LVMH group said their donation would be double that.

It said: ‘The Arnault family and the LVMH group, in solidarity with this national tragedy, are associated with the reconstruction of this extraordinary cathedral, symbol of France, its heritage and its unity.

‘In the meantime, the LVMH Group puts at the disposal of the state and the concerned authorities all its teams, creative, architectural, financial, to help the long work of reconstruction on the one hand, and of fundraising on the other hand.’

Corporate contributions are expected to climb, with blue-chip firms like Vinci, Michelin and BNP Paribas also saying they were weighing how to participate.

Air France said it would offer free flights to experts brought in to help with Notre-Dame’s renovation.

France’s Heritage Foundation has launched a ‘national collection’ on its website.

And Valerie Pecresse, president of the Ile-de-France region, has unveiled a budget of 10 million euros of ’emergency aid to help the archdiocese to start the work.’

Ms Pecresse added: ‘This reconstruction, which will obviously be very expensive, will mobilise a whole country.’

Anne Hidalgo, the Mayor of Paris, said she wanted to organise an ‘an international conference of donors’ to welcome ‘experts who are able to raise funds.’

Specialised craftsmen and rare materials are expected to be needed to restore the monument, which welcomes more than 13 million visitors each year – an average of more than 35,000 people a day.

The head of a French lumber company told FranceInfo radio that it was ready to offer the best oak beams available to rebuild the intricate lattice that supported the now-destroyed roof, known as the ‘Forest’.

‘The work will surely take years, decades even, but it will require thousands of cubic metres of wood. We’ll have to find the best specimens, with large diameters,’ Sylvain Charlois of the Charlois group in Murlin, central France, told the radio station.

The United Nations’ Paris-based cultural agency UNESCO has also promised to stand ‘at France’s side’ to restore the site, which it declared a world heritage site in 1991.

‘We are already in contact with experts and ready to dispatch an urgent mission to evaluate the damage, save what can be saved and start elaborating measures for the short- and medium-term,’ UNESCO’s secretary general Audrey Azoulay said in a statement Tuesday.

It came after a visibly emotional French President Emmanuel Macron spoke outside the gothic cathedral and said a national fundraising campaign to restore Notre Dame would be launched on Tuesday, as he called on the world’s ‘greatest talents’ to help.

He said while the ‘worst had been avoided’ and the facade and two towers saved, ‘the next hours will be difficult’.