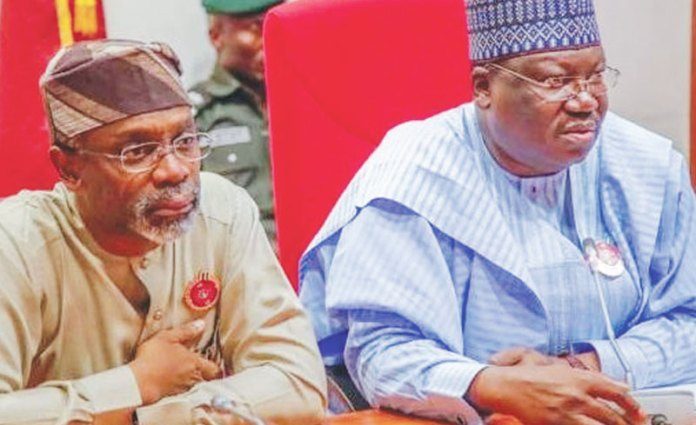 Concerns mounted yesterday over what social critics called attempts by federal legislators to rig the 2023 general election ahead of time through the manipulation of the Electoral Amendment Bill 2021.

Many critics who spoke to THISDAY pointed specifically at Section 50 (2) of the draft bill, whose consideration begins tomorrow at the National Assembly, which bars electronic transmission of results.

In fact, about 22 Civil Society Organisations (CSOs) have raised the alarm over the alleged plan by the National Assembly to pass the bill without the inclusion of the electronic collation of results in the bill.

The critics argued that since President Muhammadu Buhari would not be in contention, the lawmakers are working to the answer for their own selfish purpose, calling on Nigerians to resist them.

The CSOs in a statement yesterday said the manipulation of Section 50(2) undermined the Independent Electoral Commission (INEC)’s efforts to improve the election results management regime.

The CSOs also expressed concern over the increase in spending limits for presidential candidates and others, saying it is an indication that the National Assembly is committed to entrenching a political system that is heavily monetised.

They called on the President of the Senate, Dr. Ahmad Lawan, and House of Representatives Speaker, Hon. Femi Gbajabiamila, to speak up clearly that they are not aware of these amendments and are not part of any attempt to subvert the voices of Nigerians.

The CSOs urged Nigerians to stand up to resist the attempt by the National Assembly to manipulate the Electoral Act for self-perpetuation and self-interest, adding that they will continue to make the contact information of lawmakers available so that Nigerians can engage their representatives directly.

The statement said: “Everyone may be aware that the National Assembly will pass the Electoral Amendment Bill (2021) this week. Barring any last-minute changes, the bill is expected to be passed by both chambers on Thursday. Some proposals canvassed by citizens were adopted in the bill e.g. electronic voting, financial independence of the Independent National Electoral Commission (INEC), and new timelines for submission of list of candidates.

“However, there are discrepancies between the approved version of the bill and the alleged final copy, where some key provisions have been manipulated.

“In the alleged final copy, some key priority amendments were rejected by the leadership of the National Assembly, e.g. electronic transmission of results has been prohibited (S.50(2)) and the limits on campaign expenses have been increased (S.88).
“Following, the events of the 2019 general elections, we are convinced that INEC needs to have this power in order to prevent politicians from going through the backdoor to win the election and steal electoral mandate at gunpoint!”

The bill, however, provides that all officials of INEC and security agencies on election duties must swear oaths of neutrality and loyalty before they are sent out to carry out such assignments.
According to the bill, any person who violates the provision commits an offence punishable under Section 120 of the bill.

Also, the harmonised bill specified that a member of a political party that presents himself for employment into the commission risks a two-year jail term or a fine of N5 million or both.
Also, the new draft bill provides that the deployment of security officials for election duties must be at the instance of INEC.

According to Section 26 (1) of the harmonised draft bill sighted by THISDAY, “All staff, electoral officers, presiding officers, returning officers and security officials taking part in the conduct of an election shall affirm or swear to an oath of loyalty and neutrality as in the Second Schedule, indicating that they will not accept bribes or gratification from any person, and shall perform their functions and duties impartially and in the interest of the Federal Republic of Nigeria without fear or favour.

“(2) Any person who violates subsection (1), commits an offence and is punishable under Section 120 (dereliction of duty).
Also, Section 27 (1) states: “The commission shall for the purposes of an election or registration of voters under this bill, appoint and designate such officers as may be required provided that no person who is a member of a political party or who has openly expressed support for any candidate shall be so appointed.”

According to the bill, the commission shall be responsible for requesting for the deployment of relevant security personnel necessary for elections or registration of voters and shall assign them in the manner determined by the commission in consultation with the relevant security agencies.
The bill also stipulates that the commission shall only request for the deployment of the Nigerian Armed Forces for securing the distribution and delivery of election materials and protection of election officials.

The draft bill said: “A person who, being a member of a political party, misrepresents himself by not disclosing his membership, affiliation, or connection to any political party in order to secure an appointment with the commission in any capacity commits an offence and is liable on conviction, to a fine of N5, 000,000 or imprisonment for a term not more than two years or both.”
The harmonised draft electoral bill also stipulates that the commission shall, within 60 days after each year, make available to every political party the names and addresses of each person registered during that year.

It said when a general election is notified by the commission under section 28 of the bill, the current official register of voters certified by the commission in accordance with the provisions of the law shall be the official voters’ register for those elections.
In the case of every by-election conducted under the bill, it prescribes that the official voters’ register for use at such elections shall be the current register relating to the senatorial district or the constituency concerned.

It said the notice shall be published in each constituency in respect of which an election is to be held, adding that in the case of a by-election, the commission shall, not later than 14 days before the date appointed for the election, publish a notice stating the date of the election.

The new bill also provides that “every political party shall, not later than 180 days before the date appointed for the general election under the bill, submit to the commission, in the prescribed forms, the list of the candidates the party proposes to sponsor at the elections, who must have emerged from valid primaries conducted by the political party.”
It adds: “The commission shall, within seven days of the receipt of the personal particulars of the candidate, publish same in the constituency where the candidate intends to contest the election.

“Any person may apply to the commission for a copy of the nomination form, affidavit and any other document submitted by a candidate at an election and the commission shall, upon payment of a prescribed fee, issue such person with a certified copy of the document within 14 days.”
It further provides: “Any aspirant who participated in the primaries of his political party who has reasonable grounds to believe that any information given by his political party’s candidate in the affidavit or any document submitted by that candidate in relation to his constitutional requirements to contest the election is false, may file a suit at the Federal High Court against that candidate seeking a declaration that the information contained in the affidavit is false.”

The draft electoral bill provides that “where the court determines that any of the information contained in the affidavit is false only as it relates to constitutional requirements of eligibility, the court shall issue an order disqualifying the candidate and the sponsoring political party and then declare the candidate with the second-highest number notice of election.”
The bill further provides that “a political party which presents to the commission the name of a candidate who does not meet the qualification stipulated in this section, commits an offence and is liable on conviction to a fine of N10,000,000.”

The bill says: “A political party shall not be allowed to change or substitute its candidate whose name has been submitted pursuant to Section 29 of this bill, except in the case of death or withdrawal by the candidate, provided that in the case of such withdrawal or death of a candidate, the political party affected shall, within 14 days of the occurrence of the event, hold a fresh primary election to produce and submit a fresh candidate to the Commission for the election concerned.”