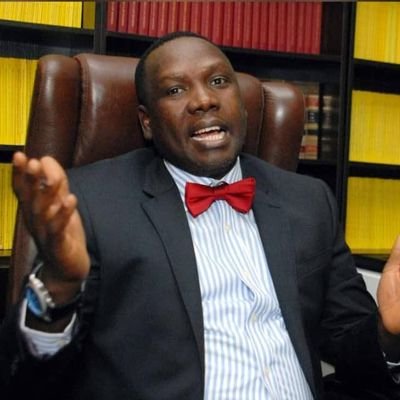 Bwala, I just read another weather-beaten effusion from you, a directionless Lawyer, who is running away from handling briefs in the courts but is satiated with bootlicking drills in Atiku Abubakar’s campaign. You say nobody will vote for The APC because of distrust. How is it then that when any APC member joins PDP, they celebrate the one with ostentatious pomp and ceremony? You don’t like APC, but you are wooing their members, and even falsely claiming that eleven APC Governors were working for your smuggler of a candidate. It then means by logic, that your party is recruiting “distrustful” elements into its fold. Grow up, Bwala, grow up.

Nigerians, when a revisionist like Bwala speaks, please go back seven years and play back his tapes for him; so that he listens to himself, and sees his dual personality; he is a mere alarmist and a petulant propagandist to the core! He worked for The APC, and its Deputy Senate President as Special Assistant on Legal matters. He sang praises of President Buhari and The APC to high heaven, and justified, albeit curiously, all the halitosis in the system. Suddenly, because Tinubu’s camp refused to release the money to him, he capitulated and latched on to save his life, to a One Million Naira wage for a short-time job with The PDP; something akin to a political prostitute’s role. He had dubiously said he won’t support same faith ticket.

Bwala complains that Asiwaju Tinubu has refused to release money for his Directorates. My people, please how does that become Bwala’s headache? He is supposedly working for his own candidate in a different party but complaining that his opponents are not equipped to fight him. How does that become his ulcer? It is very likely that Bwala is a mole in Atiku’s camp because that guy loves money like “kilode”. How does he want the world to take him seriously when for seven years he was The APC’s megaphone and only made a U-turn when Asiwaju Tinubu turned down his bogus request; so I learnt. That man has his eyes on Tinubu’s money. Little wonder, he’s still complaining that money has not been released to Tinubu’s Directorates. Bwala should go and mind his business. “He dey wack Atiku one million naira for short- time work, he wan still wack Tinubu own, kasala don burst o, Bwala!.

Repeatedly, I have said it loud and clear, that Atiku Abubakar’s aspiration is against the run of play. It will be the most unconscionable political drudger, to have the presidency go northerly in 2023 after President Buhari’s eight years. Only those who are driven blindly by their selfish, egocentric and inordinate ambition, who are being promoted by uncultured rottweilers of Bwala’s ilk, who drool all over the media in the name of spokesmanship, who intend to hurt the conscience of the nation will even contemplate such. We will not allow them. Fourteen forthright Governors of The APC from the North have spoken so eloquently alongside their Southern compatriots, that power should go southerly. These Governors couldn’t be more altruistic and patriotic. We will tame the noise and barking of Atiku Abubakar’s attack dogs, by the sanctity of our votes and treat them with the therapy of exposing their double-speak, dual personality, and pretentiousness. I will continue to puncture their lazy arguments of given to justify their vaulting ambition; which is assuredly driving the country on the rough road to perdition. As I stated before, we will not allow them. The APC candidate, Asiwaju Tinubu, will win the 2023 general election, no matter how much saliva the Bwalas of this world pour out on the altar of Baals.