Buhari in Maiduguri, Vows Not to Rest Until Peace is Restored 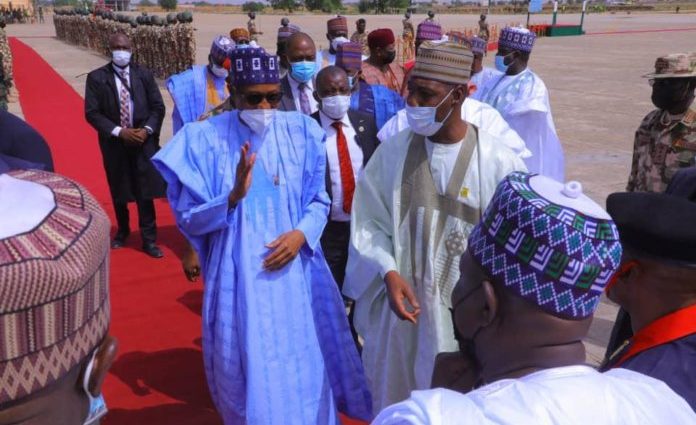 President Muhammadu Buhari yesterday assured residents of Borno State of the federal government’s readiness to fight terrorism to the end, telling the military not to give criminals a breathing space to undermine Nigeria’s interests.

The president, during a visit to Borno State, commended troops for their loyalty and selfless service to Nigeria and urged them not to relent in their efforts to end the insurgency in the North-east.

He promised support for the families of fallen security personnel, saying he would ensure all Internally Displaced Persons (IDPs) return to their homes.
He also commended the state Governor, Prof. Babagana Zulum, for his resilience and relentless efforts in rebuilding the state.

Buhari, during the visit to appraise the security situation in the state and to inaugurate some development projects attributed the recent successes recorded by the military against the insurgents and terrorists at Dikwa, Damboa and Gwoza to careful planning, infusion of new equipment and other war materials as well as quality military leadership.

He, however, acknowledged the enormity of the task ahead of the military.
“The attacks launched by cowardly terrorists against military and civilian targets last month and in previous months were a pointer to us that the work of defeating insurgency and terrorism and of restoring permanent peace to this region is not yet over,” he said, adding: “We will not rest until all the millions of Internally Displaced Persons are able to return and resettle in their homes and rebuild their shattered lives.”

He expressed the hope that the service chiefs would bring to bear on the war, their experience as commanders in theatre at various times.

The president said: “All of them are, therefore, personally familiar with the challenge of insurgency. I fully expect them to bring this wealth of personal experience to bear as we move to end this scourge once and for all.

“No doubt, these successes owe a lot to the role played by volunteers of the Civilian JTF, hunters and vigilantes. These good people include women, who are making huge sacrifices and patriotic contributions to our peace-restoration efforts.”

He stated that many servicemen and women, as well as volunteers, had been killed in the fight to rid communities and the country of terrorism and insurgency and thanked all those involved for their gallantry and sacrifices.

Buhari assured their loved ones that their sacrifices will not be in vain: “I must also acknowledge the very important role and the sacrifices made by parents, guardians and other loved ones amongst the people of Borno State, the North-east region and the country as a whole, who support their sons, daughters, husbands, brothers and sisters in going to battlefields to defend Nigeria’s sovereignty, territorial integrity and peace. I thank and commend them for their resilience and assure them success is in sight.”
He said it was a mark of appreciation for the sacrifices made by Borno State’s volunteers that the Nigerian Army was authorised to enlist hundreds of them into the Army.

He urged the people to sustain the cooperation with the military and the other security services.
“Both must see each other as being on one side in order for us to succeed,” he said.
Buhari said the late President Idris Deby of Chad played a major role in the fight against terrorism in the Lake Chad region and urged his successors to work hard in restoring democracy to the country and support the processes of bringing peace to the region.

He said the recent appointment of Ambassador Babagana Kingibe as special envoy to Chad and the Lake Chad Basin was intended to accelerate the restoration of democratic stability in the Chad Republic and enhance cooperation among all the countries of the Lake Chad Basin.

He assured the people that the federal government had taken decisive measures to safeguard IDPs and refugees who recently returned from Cameroon and the Niger Republic, adding that it was engaged in the task of rebuilding their communities after more than a decade of war and terrorism.

According to him, “It was part of these measures that I gave approval for the federal government to build 10,000 resettlement homes in Borno State. Four thousand of these homes have already been completed. Furthermore, I approved for constant release of food intervention by the Nigerian Customs Service and the North East Development Commission in order to support displaced persons.

“I have directed these agencies to sustain and deepen this support. I also wish to specially commend His Excellency, Governor Babagana Umara Zulum, for his tireless efforts in directly supervising the distribution of food and economic empowerment to IDPs in all local government areas.” He expressed the belief that the efforts at alleviating the suffering of displaced communities will hamper attempts by terrorists and insurgents to recruit fighters and spies from IDPs and other vulnerable populations through the use of paltry material incentives.

On electricity supply, Buhari said his administration would continue to make concerted efforts towards guaranteeing energy security to all, adding that Maiduguri could not, and would not be left out.
He said the Nigerian National Petroleum Corporation (NNPC) had been directed to expedite the delivery of 50MW power plant in the state towards ensuring the restoration of electricity to Maiduguri and its environs.

“Furthermore, in the light of the current improvement of security in the state, I have also issued directives for the immediate resumption of oil & gas exploration activities in the Lake Chad Basin. This is part of our overall effort to restore the state back to normalcy,” the president explained.

He also commended the Shehu of Borno, Abubakar Ibn Umar Garbai El-Kanemi, as well as all the other royal highnesses and Bulamas at all levels for their very exemplary leadership, patience, determination and wisdom during the past decade of ravage by insurgency and terrorism.

According to him, the fact that royal highnesses now operate from their domains was evidence that peace was being restored to the communities despite the challenges that remain to be overcome.
“The elders, statesmen, Muslim and Christian community leaders all over this state and region also deserve our thanks and warm appreciation for their resilience, moral leadership and support for the federal and state governments during these trying times.

“I will never forget in my life that during my career as a politician, Borno State is where I got the highest percentage of votes, more than 90 per cent! The least I can do for you is to continue the relentless effort to fully restore peace to this state, the North-east region and the country as a whole,” he said.

He urged the military and security agencies to continue to make Nigeria proud.
Buhari also interacted with some of the wounded soldiers assuring them that the government was committed to their recovery and welfare.

In his remarks, the Commander of Theatre Operations HADIN KAI, Maj. Gen. Felix Omoigui, assured troops of the president’s confidence and commitment to their welfare, especially in ending the war.
He thanked the president for the visit to the troops, which he said would greatly boost the morale of all those fighting to keep the country in peace.

In his remarks, Zulum thanked the president for the relative peace in the state, buoyed by the heavy presence of military and security men who have been engaging the terrorists.
“We have witnessed the gradual return of peace to Borno State and it is our sincere hope that insurgency will soon be brought to an end,” he said.

The governor appreciated the president for various developmental interventions, which include infrastructure, particularly the approval of 10,000 units of housing for IDPs of which 4,000 had been completed.

President Thanks Nigerians for Opportunity to Serve

In the meantime, the president has expressed his gratitude to Nigerians for the opportunity given to him to serve them.
He said under his watch, efforts would be made to improve the livelihood of Nigerians, starting with adequate security.

He said at the palace of the Shehu of Borno, Alhaji Abubakar Ibn Garbai El-Kanemi, that he started his administrative career as a military officer in Borno State as a governor for seven months, under Gen. Murtala Muhammed, before he was appointed Minister of Petroleum by former President Olusegun Obasanjo, who was then a military head of state.

He added: “My commitment to serve Nigerians is a payback for the love shown to me. I started my political adventure in Maiduguri and I always look forward to coming here.”
In his remarks, El-Kanemi thanked the president for consistent response to the plight of the people in the state, saying that the security situation has improved.