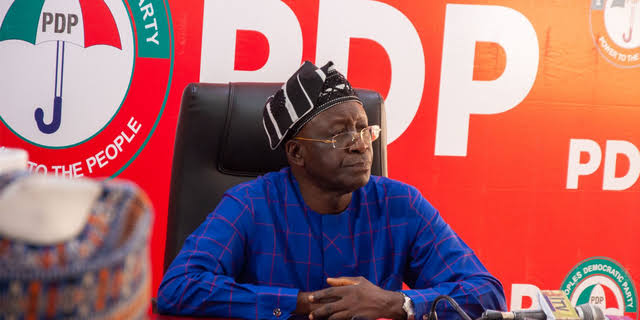 The political turbulence facing the PDP National Chairman, Sen. Dr. Iyorchia Ayu, seems to be very far from being over. The PDP group that started the call for Sen Ayu’s resignation wants to ensure a representative balance between the North and South particularly in the light of Alhaji Atiku Abubakar’s emergence as the Presidential candidate of the party during the Presidential Primary Convention held in Abuja.

The Concerned Peoples Democratic League (CPDPL) has made a fresh demand. Denton News reporter gathered that the leadership of the CPDPL are demanding that the PDP National Chairman, Sen Ayu to produce within seven days, certain public documents relating to the PDP finances, or face legal action

Our reporter contacted the Leader of CPDPL, Comrade D. Z. Warmate on the phone, who acknowledged that the a petition-like letter was written by the group and signed by his humble self and the General Secretary.

He said, “we don’t have an issue with our party or any of the leaders, just that we want to put our leaders on their toes to always do the right thing, by asking questions because we want the best for our great party and Nigerians.”

But the leader alleged that ” Our great party concluded its elective national convention on the 30th day of May 2022, and today makes it two months thirteen days, eleven hours, forty-five minutes, and fifty-five seconds, and the National Chairman has not deemed it fit or necessary to call for a National Executive Committee meeting with the purpose of explaining  to them how much was generated during the process leading to the primaries and the primaries itself, and this is contrary to our party’s constitution and tradition.”

Denton News asked Comrade Warmate to state their demands but our reporter was referred to the letter attached letter below.