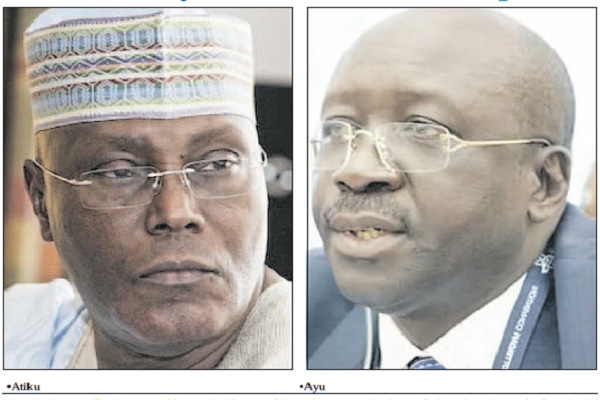 The Concerned PDP League (CPDPL), has descended heavily like a hurricane on the media aide/Special Assistant on Communication and Strategy to the National Chairman of PDP, Simon Imobo-Tswam, over his statements.

Daily Sun and The Punch News report the statements of Simon Imobo-Tswam that “If anyone or group is truly pushing for Ayu’s removal, such a person or group is/are operating from a position of gross ignorance. “Those calling for Ayu’s resignation are not thinking these things through; they are driven largely by emotions.” And also said Atiku was responsible for choosing Okowa as his running mate and not the PDP nor Ayu, respectively.

Speaking to Denton News, the Concerned PDP League Leader, Comrade Warmate, condemned the media aide to the National Chairman of the PDP, Simon Imobo-Tswam, statements said, he is a true reflection of his own statements and that his gross ignorance of events in the PDP stings like the dungs of cows for minimizing and dismissing the genuine grievances, concerns and criticisms of his principal whose abysmal failures has increased the chances of the party’s defeat and gross electoral misfortune in the forthcoming 2023 election.

Simon Imobo-Tswam denying the role of his principal (the black national chairman) in orchestrating the emergence of Dr. Okowa as the vice-presidential candidate as alleged can not dissuade or assuage us from demanding the resignation of the national chairman with a low-performance record, who is bent on meting out injustice on PDP members from the south. If it’s not greed for power, shame, and cowardice, his principal should have owned up to his failures and disregard for a gentle man’s agreement and understanding and resigned.

It seems the presidential candidate and some leaders want to reenact and reemphasize PDP 2019 defeat and misfortune in 2023 by allowing Ayu to continue in office. Except that Alhaji Atiku just enjoys taking flags without flying them because Ayu’s continuous stay in office as national chairman is an arrest of our unity and 2023 victory. In fact, Ayu has become a subject of study for a failed political party leadership.

Simon Imobo- Tswam, further expose his stinking ignorance and allegedly expose his boss’s secret and deliberate effort to frustrate PDP 2023 victory, after failing to defend the sanctity of the constitution of our great party, which led to the lopsidedness in PDP with the north producing the presidential candidate, national chairman and BoT chairman at the expense of the south and the 2023 presidential election by shamelessly denying their unfathomed failures. And let me add that, his principal lacks every oita of good conscience and integrity,  otherwise, he should have resigned by now.

Underate this group at your own peril and see what they started before the PDP Special national convention and how it has spread. Ayu Must Go is a national anthem now not just in PDP but in Nigeria. That was how they started the Secondus Must Go and his people took them for granted, see today the outcome can speak for itself. The group has at every point awaken PDP from its slumber. The simple message today now is, that Ayu Must Go.

Warmate said, the national chairman’s aide See’s those that express genuine grievance, agitation, concern, and criticism as grossly ignorant because he is politically caged. He supported his statement with Alejandro Jodorowsky’s quote saying “Birds born in a cage think flying is an illness.”
He further said, Ayu has failed woefully to take it or leave it and he must go. We have even gone beyond because we have ceased to recognize him. And add screenshots of people’s and former leaders of PDP’s perception of Ayu and the PDP under his watch in the public space, below.