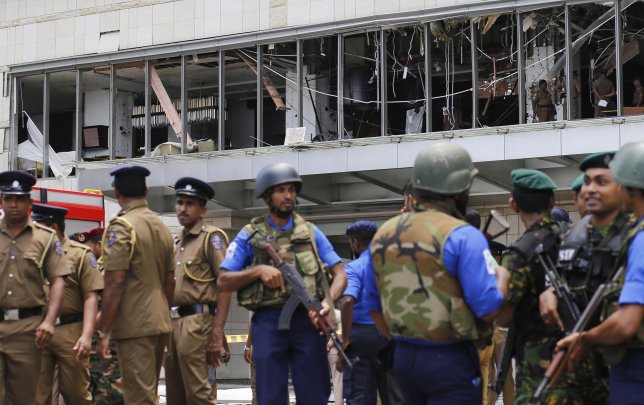 A bomb has been found at Sri Lanka’s main airport this evening just hours after a series of explosions killed 207 people.

The six-foot pipe bomb was discovered by air force personnel on a routine patrol at Bandaranaike International, also known as Katunayake Airport or Colombo International.

It has since been safely destroyed. Air Force Spokesman Gihan Seneviratne told the Sri Lankan Sunday Times: ‘A PVC pipe which was six feet in length containing explosives in it was discovered.’

The airport was put into lock-down while the device was detonated, reports said.

More than 450 people were wounded in the attacks.

Sri Lanka’s death toll rose to 207 earlier today after a series of coordinated explosions hit hotels and churches in the country.

Five British citizens have been confirmed among the dead, two of whom were joint US-UK citizens.

Other fatalities are said to include three Indians, two Turks, one Portuguese citizen and an unknown number of Dutch and Chinese nationals.

The government has since shut down access to social media and messaging services in the country after the eight explosions, in a bid to stop the spread of ‘misinformation’.

This afternoon he visited Brits being treated in one of the main hospitals in Colombo where casualties had been taken.