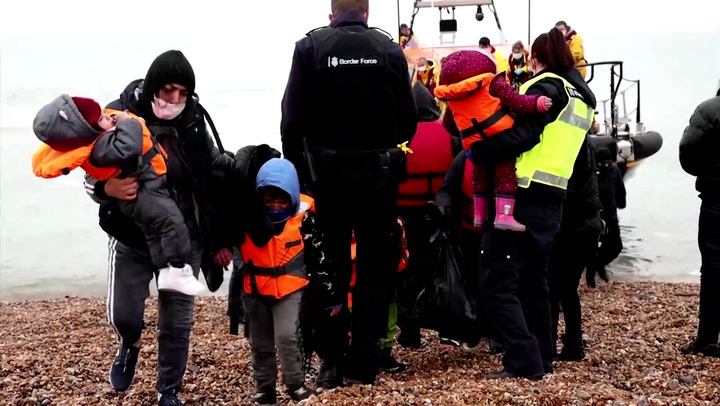 At least 31 people, including a little girl, have died in the English Channel and others are injured after attempting to make the treacherous journey to the UK in a small boat, France’s interior minister has confirmed.

It is understood an inflatable dinghy sunk in the water between Calais and Dunkirk, northern France, after setting off for Britain’s shores.

A fishing boat sounded the alarm earlier on Wednesday after spotting several bodies in the water, while the maritime authority said a French naval boat retrieved several dead people and multiple casualties, including some who were unconscious.

The death toll has risen throughout the day as rescue teams searched the waters, with French Interior Minister Gerald Darmanin confirming 31 people drowned, including five women and a little girl.

It is believed 34 people had been on the dinghy that capsized, he added.

The minister said four people have been arrested in connection with the incident and two of the suspects later appeared in court.

As many as 25 boats set sail from Calais this morning, ITV News has been told.

Prime Minister Boris Johnson, who said he was “shocked, appalled and deeply saddened” at the “disaster”, is to host an emergency COBRA meeting on the tragedy amid spiralling numbers of migrants risking their lives to reach the UK.

French President Emmanuel Macron called for an emergency meeting of European ministers, as he vowed: “France will not let the Channel become a cemetery.”

French MP for Calais, Pierre-Henri Dumont, told Sky News the English Channel is “becoming the new Mediterranean sea”, adding it is “like an open sky graveyard”.

He said the UK and France must find a better solution to the migrant crisis.

However, Mr Johnson suggested the French side was not doing enough, adding: “We’ve had difficulties persuading some of our partners, particularly the French, to do things in a way that we think the situation deserves.”

Speaking to reporters at Downing Street, he said it was vital to “break” the people trafficking gangs which, he said, were “literally getting away with murder” and hoped the UK and France could work better together following the tragedy.

The PM continued: “My thoughts and sympathies are first of all with the victims and their families. It’s an appalling thing that they have suffered.

“But what I’m afraid it also shows is that the operation that is being conducted by our friends on the beaches, supported as you know with £54 million from the UK to help patrol the beaches, the technical support we’ve been giving, they haven’t been enough.”

Labour leader Sir Keir Starmer said: “For lives to be lost in such dangerous and desperate circumstances is a devastating and heartbreaking tragedy.

“The UK government, France and the wider international community have a duty to prevent people from being forced into such peril.”

“We will continue to intensify all cooperation with France and other European partners to prevent migrants embarking on these deadly journeys,” she added.

British and French authorities are searching the area using helicopters and coast guard vessels, according to the French maritime agency for the region.

Fisherman, Nicolas Margolle, told Reuters news agency that he spotted two small dinghies on Wednesday – one empty and the other with people onboard.

He said another fisherman had called in rescue teams after seeing 15 people floating motionless close to an empty dinghy.

French prime minister Jean Castex said the incident was a “tragedy”.“My thoughts are with the many missing and injured, victims of criminal smugglers who exploit their distress and injury,” he said.

Dover MP Natalie Elphicke said: “This is an absolute tragedy. It underlines why saving lives at sea starts by stopping the boats entering the water in the first place.

“As winter is approaching the seas will get rougher, the water colder, the risk of even more lives tragically being lost greater.“That’s why stopping these dangerous crossings is the humanitarian and right thing to do.”

It comes after figures showed the number of migrants who have made the journey across the Channel in small boats this year is now three times the total for the whole of 2020.

More than 25,700 people have made the dangerous journey to the UK in small boats this year, according to data compiled by the PA news agency.

The Dover Strait is the busiest shipping lane in the world and has claimed many lives of people trying to cross to Britain in inflatable dinghies.