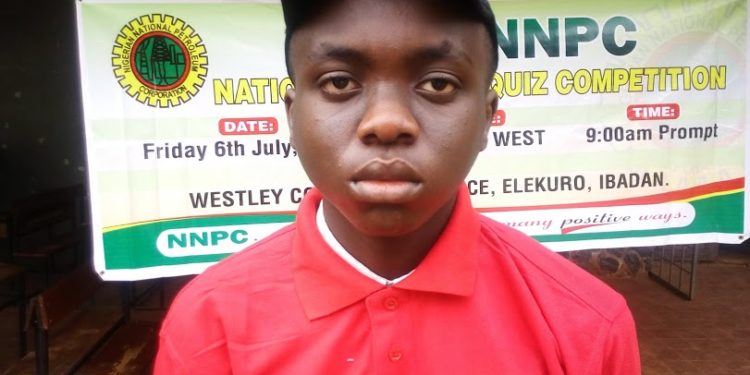 When he was preparing for the 2019 Unified Tertiary Matriculation Examination (UTME), Ekene Franklin Ezeunala said his target was to make a score of 370 out of a possible 400.

The SS3 pupil of Meiran Community Secondary School, Meiran, Lagos, made 347 – and he is still happy with himself.

“I tried to make a good score while preparing for the examination.

“The score I was targeting was 370.  I still feel happy that I still achieved a good result,” said the public school pupil.

Ekene, who will turn 15 in 13 days (May 27), said he was shocked to be announced the candidate with the highest score in the examination.

“When I first heard I was the highest, I was a bit shocked.  But I became glad and happy.”

The teenager said regular participation in competitions on behalf of Lagos State helped his preparations.

“The competitions impacted positively on my preparation.  Some of the subjects I did I had done them in preparing for the competitions and met the same thing in the exams,” he said.

Ekene wants to study Chemical Engineering in the university – for the love of it and to impact the society.

He said he was already working on some bio-fuel research to reduce carbon emissions in Nigeria.

“I want to study Chemical Engineering because I feel that chemistry and technology can impact the general public and society in various ways; and personally, I have a flair for chemistry,” he said.

Ekene’s mother, Mrs. Chinelo Ezeunala, a Chemistry teacher at Hightree College, a private school in Berger, Lagos, said she was happy about her son’s feat.

The Chemistry graduate said her son has always shown brilliance in his education and as a result skipped some classes in primary school.

“He started school early at two years plus because I was serving when I had him.

“He attended Philthel Primary School, Akoka.  The school was owned by a professor teaching at the University of Lagos.  But the woman is late now.

“In primary school he was very bright so he was promoted twice that was why he is 14 years in SS3,” she said.

When asked if she would allow the boy to go, she said it would be discussed as a family.

She said the family was not buoyant enough to afford private university fees if the offer was not a full scholarship.

She said her husband was a retired staff of the defunct NITEL where he worked as a technician and had experienced hard luck in his efforts at running businesses.

She said: “We are not really well off and we cannot afford private university fees.  If it is full scholarship, my opinion is ‘why not?’”