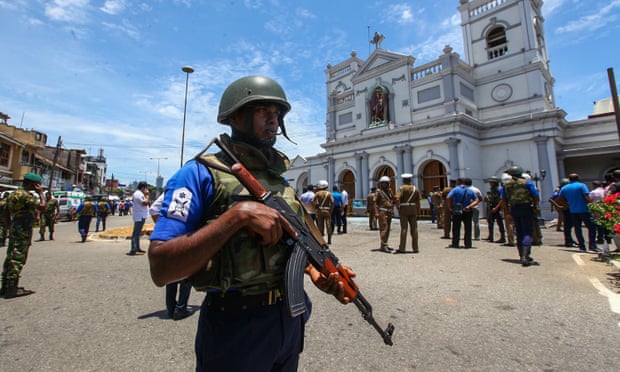 At least five British citizens, including two US-UK dual nationals, were among more than 200 people killed in a coordinated wave of bombings in Sri Lanka on Easter Sunday, the island’s foreign ministry has confirmed.

A government-ordered social media blackout in Sri Lanka has hampered efforts by friends and family to make contact with loved ones from outside the island after the deadly attacks on luxury hotels and churches.

One Dutch, one Chinese, one Portuguese and two Turkish nationals have been killed, their respective foreign ministries have confirmed. Three UK nationals and two US-UK dual nationals were also among the dead. The UK Foreign Office would not comment on the figures. The vast majority of the 207 killed and 450 injured were understood to be Sri Lankan.

Local media in Sri Lanka reported that foreign nationals from the US, Denmark, China, Japan, Pakistan, Morocco, India and Bangladesh were among the dead, citing a national hospital spokesperson.

The UK Foreign Office said security had been stepped up across Sri Lanka after the bombings and updated its advice on travel to the island.

Britain’s high commissioner to Sri Lanka, James Dauris, said: “We understand that some British citizens were caught in the blasts but we are unable to say how many people are – or might have been – affected.”

Later on Twitter, he said: “I’ve been speaking this afternoon with Brits in the hospital who have been affected by today’s senseless attacks. My team’s and my thoughts go out to all those people who are suffering as a result of the deplorable violence Sri Lanka has witnessed this Easter Sunday.”

One Chinese national was killed during the blasts on Sri Lankan churches and hotels on Sunday, the Chinese state newspaper People’s Daily reported. Earlier, the state news agency Xinhua said four Chinese nationals were injured, but were in a stable condition in hospital.

Two Turkish citizens were among the dead following the attacks, the state agency Anadolu said. The Turkish nationals were engineers working on a project in Sri Lanka.

Stef Blok, the Dutch foreign minister, said one citizen from the Netherlands had died in the attacks. He tweeted: “Horrified by the terrible attacks on this Easter Sunday in Sri Lanka. Our thoughts are with the victims, including one Dutch national at this moment. The Netherlands has passed its heartfelt condolences to the Sri Lankan people. We stand with you.”

Japanese nationals have been injured in the terror attacks, according to the Kyodo News agency.