Theresa May To Make Written Brexit Offer To Jeremy Corbyn 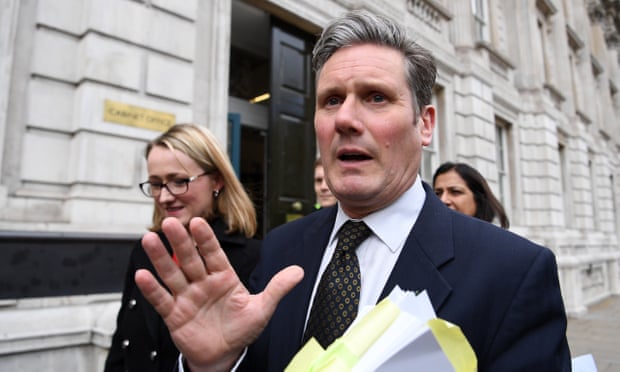 Theresa May is expected to write to Jeremy Corbyn to set out the government’s offer on Brexit, with negotiations due to resume in Downing Street on Friday.

With just five days to go before the prime minister must travel to Brussels to request a further Brexit delay from EU leaders, little progress appears to have been made on finding a compromise deal both Labour and the Conservatives can back.

But after the government delegation reported back to May on Thursday, officials began drafting a letter setting out a way forward.

One government source suggested that, in accordance with Labour’s demands, it would include the proposal that a confirmatory referendum on any Brexit deal be offered to MPs as an option in any vote next week.

Technical talks lasted four and a half hours, but both sides emerged cautious about how much progress had been made.

The Guardian understands the Downing Street team of David Lidington, Steve Barclay, Julian Smith, Greg Clark and Gavin Barwell spent much of their time explaining the details of the withdrawal agreement, rather than proposing movement on any of May’s red lines.

Earlier in the week, May had hinted she was open to compromise on issues such as the customs union, with her attorney general, Geoffrey Cox, later saying it was something he could live with.

A deal including a customs union would be explosive in the Conservative party as the majority of Tory MPs oppose such a move.

Hardline Eurosceptic MPs are still furious, with many plotting moves against the prime minister, despite there being no formal Conservative party mechanism to move a motion of no confidence in her until December.

One Brexiter MP said there were moves afoot to destabilise the prime minister including many more letters going to Graham Brady, the chair of the 1922 Committee, and an orchestrated campaign of letter-writing by Conservative association chairmen.

Another Conservative MP said there could come a point where the feeling against May was so strong that it would end in MPs effectively “storming into Downing Street and hauling her out of it”.

A third Tory MP, Andrew Bridgen, who is holding out against May’s deal, said: “For the sake of the country and democracy and the party we have got to find a way to get rid of her. You’ve either got an international trade policy and a seat at the table or, if you’ve got a customs union, you are on the menu.”

A cabinet source insisted May’s intention in holding the talks with Labour was genuine, but acknowledged they would probably end in another series of parliamentary votes on the options.

An alternative could be for May to extend an offer of formal talks to Labour MPs who want a Brexit deal. Around 25 Labour MPs wrote to Corbyn on Thursday urging him to “go the extra step” to secure a better Brexit deal with the prime minister without the need for a referendum.

The MPs who have signed the letter, many of them from leave-voting seats, include the former minister Caroline Flint, backbenchers Sarah Champion and Gareth Snell, and leftwing Eurosceptics such as Dennis Skinner, Ronnie Campbell and Kevin Barron.

“A second referendum would be exploited by the far right, damage the trust of many core Labour voters and reduce our chances of winning a general election,” they said in the letter.

The MPs said Corbyn could achieve many of Labour’s objectives in the talks, referring to his party conference speech where he said Labour could support a “sensible deal” with a customs union, no hard border in Northern Ireland and one that protected jobs, workers’ rights and environmental standards.

“We believe you are close to achieving that in the coming days,” the MPs said. “At the general election we were clear about respecting the 2016 vote and about securing those Labour goals. Therefore we feel if compromise is necessary to achieve this deal and avoid fighting the European elections, we should go the extra step to secure this.”Advertisement

The group said that the party’s conference policy “does not require a confirmatory ballot on any deal that meets those conditions”.

However, the Labour leader received an opposing missive from 12 MPs including Corbyn allies and shadow ministers Clive Lewis and Marsha de Cordova, as well as the former shadow cabinet minister Kate Osamor, which urged him not to sign up to a deal unless it was subject to a public vote.

The shadow foreign secretary, Emily Thornberry, also wrote to frontbench colleagues insisting that a deal not subject to a referendum would breach Labour’s conference policy and would need to be put to a shadow cabinet vote.