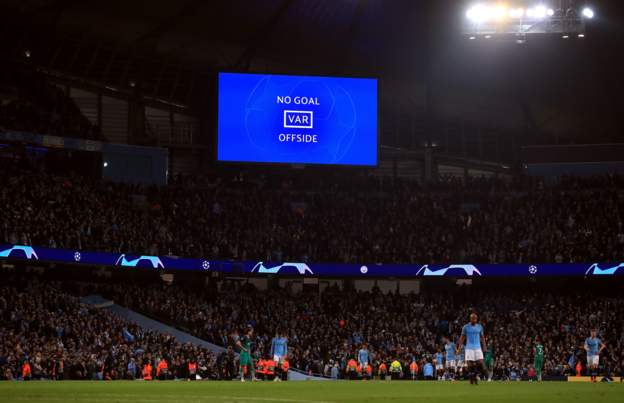 That silence came from the stunned City supporters after they thought their side had won it, they thought Raheem Sterling had completed an injury-time hat-trick, only for the goal to be ruled out by the VAR for an offside in the build-up.

Silence. That is what it was. It was total silence. This was the most extraordinary end to a Champions League tie as Tottenham Hotspur held on to defeat Manchester City on away goals and reach their first ever semi-final.

The pocket of Spurs fans celebrated but silence everywhere else in this stadium was simply, weirdly eerie.

Before that depleted and down Spurs had rallied to score decisively through substitute Fernando Llorente – with the suspense heightened again as that also went to the VAR to check – in what turned out to be a seven, rather than an eight, goal frenzy.

It was endlessly end-to-end. No-one wanted it to end. No-one apart from Spurs who dug deep and then dug deeper to show extraordinary reserves of resilience and resistance and set up a mouth-watering semi-final against another vibrant young team in Ajax.

Pep Guardiola had demanded an atmosphere; and what an atmosphere he got. Never mind flags or music. Nothing creates atmosphere like a remarkable, crazy game. What an incredibly, topsy-turvy, breathless start, it was. There were four goals in 11 minutes; in fact four in just seven minutes as both sides struck twice and there was not a moment to even take stock; catch one’s breathe. There were two fine finishes; two deflected goals and poor defending as well as incisive forward play.

Kevin De Bruyne started it, cutting in from the right, exchanging passes with Sergio Aguero and turning the ball out to Raheem Sterling. He ran in from the wing with Kieran Trippier backing off and arced a right-foot shot around the full-back, beyond the grasp of Hugo Lloris and into the corner of the net.

Spurs then sliced through the heart of City’s defence not once but twice. Firstly Lucas Moura broke forward to find Dele Alli who tried to play it on with Aymeric Laporte intervening but only to tee up Heung-Min Son whose first-time shot ricocheted up off the legs of Ederson – did he commit too early? – to level.

Remarkably Spurs and Son broke through once more and once more there was a Laporte mistake as he mis-controlled with a heavy touch on half-way and Moura whisked the ball from him. Suddenly City were undermanned and over-run in defence and Spurs swarmed forward and Christian Eriksen picked out Son who curled a quite brilliant shot around Kyle Walker and beyond Ederson’s grasp.

A quick calculation meant that City now needed three goals to go through and, yes, they immediately clawed one of them back as Aguero sent the ball out to Bernardo Silva in space on the right of the Spurs penalty area. Danny Rose tried to block but only managed to divert Bernardo’s shot past Lloris’s outstretched leg, as the goalkeeper dived to cover, and just inside the post.

So it was 2-2 and almost too, too much to take in. It meant City needed two more goals, without conceding, while if Spurs could hold out – and it was a long time to hold out against this opponent – they would make it.

Scratch that. They held out for just nine more minutes with De Bruyne again central as he surged towards the by-line from Bernardo’s cute flick and wonderfully whipped the ball low across the six-yard area for Sterling to arrive beyond the far post – with Trippier again hesitant – to side-foot home.

It meant that there were five goals in the opening quarter of the game, the first time that had happened in Champions League history, the aggregate score was level, but Spurs held the away goal advantage. One more unanswered City goal, though, and they were out. Confused? Everyone was. Confused and enthralled.

There was another blow for Spurs, a big blow. They did not concede but they lost yet another midfielder to injury with Moussa Sissoko pulling up as he tried to stop De Bruyne. Mauricio Pochettino had little option from the bench – even Erik Lamela had pulled out before the warm-up – so brought on Fernando Llorente and re-shuffled before Son angled a shot just beyond Ederson’s far post. They were not done as Pochettino ran towards the dressing rooms before the half-time whistle. He needed a moment of calm.