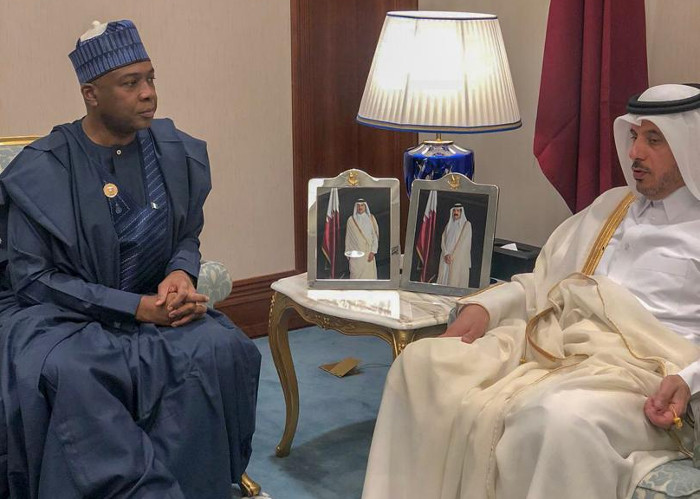 The President of the Senate, Dr Bukola Saraki has met with the Prime Minister of Qatar, His Excellency, Sheikh Abdullah bin Nasser bin Khalifa Al Thani, in Doha.

The number three citizen met with the Quatari PM on the sidelines on the ongoing Inter Parliamentary Union Assembly (IPU) holding in Qatar.

During the meeting, Saraki raised the issue of visiting visa restrictions to many Nigerians, urging the PM to look into it review its visa policy concerning Nigerians.

In series of tweets on his handle @BukolaSaraki, he wrote: “Today, it was a pleasure to meet with the Prime Minister of Qatar, His Excellency, Sheikh Abdullah bin Nasser bin Khalifa Al Thani, in Doha, Qatar.

Saraki who arrived Doha on Saturday morning, led a delegation of federal lawmakers to the 140th Inter-Parliamentary Union (IPU) meeting that commenced on April 5th and expected to end on April 8th.

On the delegation was Deputy Speaker, Hon. Yussuff Lasun Suleimon, who is the deputy leader of the delegation. Other lawmakers on the trip include Senators Duro Faseyi and Ibrahim Rafiu Adebayo.

Saraki, according to a statement by his Chief Press Secretary, Sanni Onogu, is expected to make a presentation on Sunday on the topic: “Parliaments as platforms to enhance education for peace, security and rule of law”.

He is also expected to hold bilateral meetings with the President of the IPU, Ms Gabriela Cuevas Baron, Speaker of the Qatar Parliament/Chairman of the Consultative Assembly of Qatar, Ahmad Bin Abdullah Bin Zaid Al Mahmoud, United Nations (UN) Undersecretary, Mr. Vladimir Voronkov and the Speaker of the Parliament of Kenya, Mr, Kenneth Lusaka.

The President of the Senate is expected to take a complimentary tour of Aljazera Headquarters and meet with an executive of the global television outlet, Mr. Naseer Al-Saadi.

The delegation is expected back in the country on Tuesday.