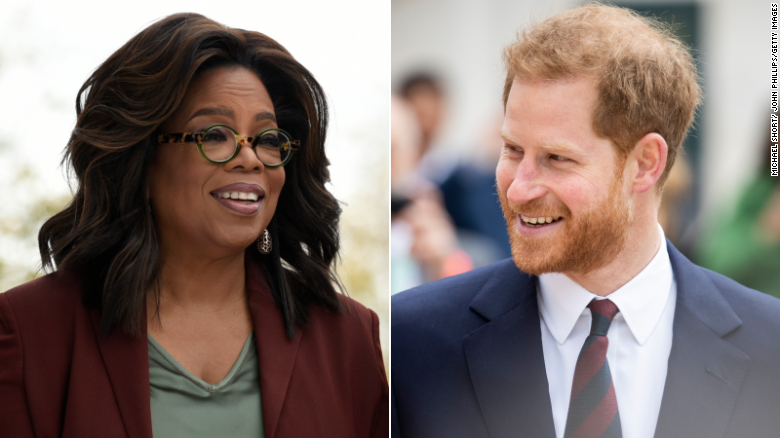 The Duke of Sussex has today announced a partnership with Oprah Winfrey as co-creators and executive producers of a forthcoming mental health documentary series for Apple.

Prince Harry, 34, has previously spoken out about battling ‘numerous breakdowns’ while coming to terms with mother Diana’s death, and Oprah, 65, revealed that he jumped at the chance to get involved about a project that is so close to his heart.

The multi-part documentary series, which the pair has been working on for ‘several months’ during a number of ‘secret meetings in London’, will focus on both mental illness and mental wellness, and aims to inspire viewers to have an honest conversation about the challenges they face. This commitment builds on Harry’s long-standing work on issues and initiatives regarding mental health, and has seen him share his personal experience and advocate for those who silently suffer.

In 2017, together with The Duke and Duchess of Cambridge, Harry, launched Heads Together, a mental health initiative spearheaded by The Royal Foundation.

The Duke of Sussex said today: ‘I am incredibly proud to be working alongside Oprah on this vital series which we have been developing together for several months.

‘I truly believe that good mental health – mental fitness – is the key to powerful leadership, productive communities and a purpose-driven self.

‘It is a huge responsibility to get this right as we bring you the facts, the science and the awareness of a subject that is so relevant during these times.

‘Our hope is that this series will be positive, enlightening and inclusive – sharing global stories of unparalleled human spirit fighting back from the darkest places, and the opportunity for us to understand ourselves and those around us better.’

There are reportedly plans for Harry to ‘appear on camera’, though it hasn’t been decided whether he will be interviewed by the chat show host.

And in an interview with CBS in New York on Wednesday morning, Oprah revealed exactly how the project came about, explaining that she actually pitched the idea to Prince Harry during a discussion about global issues.

‘I asked [Prince Harry] the question, “What do you think are the most important issues facing the world right now?” and he said there are two,’ Oprah revealed.

2019-04-10
Previous Post: Nigeria Can Only Take Its Rightful Place In Comity Of Nations If ― US Consulate
Next Post: Dangote Is The Greatest Man Out Of Africa – Otedola