A chieftain of the All Progressives Congress in Rivers State, Senator Magnus Abe, has said that politics of bitterness and division was adversely affecting the development of the state.

Speaking during a funeral of late Mrs. Fyna Atuzie-Boms, wife of the former Attorney General of Rivers State, Mr. Worgu Boms, at the Civic Centre in Port Harcourt on Saturday, Abe regretted that bitterness and hatred had come to characterise Rivers politic.

He specifically observed that the situation was making it impossible for Rivers people to come together to fight for Rivers development.

“The greatest challenge that Rivers State faces today is not all the things we have mentioned.  It is the fact that hatred, bitterness have characterised our politics and have divided us in a way that we have never been divided before.

“It has made it impossible for us to come together to face the challenges that are confronting our state. I want to thank the Governor of Rivers State for leading by example.

He pointed out that while some people were looking for the causes of Rivers political challenges, Wike is seeking solutions. 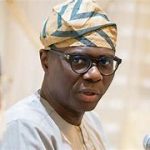