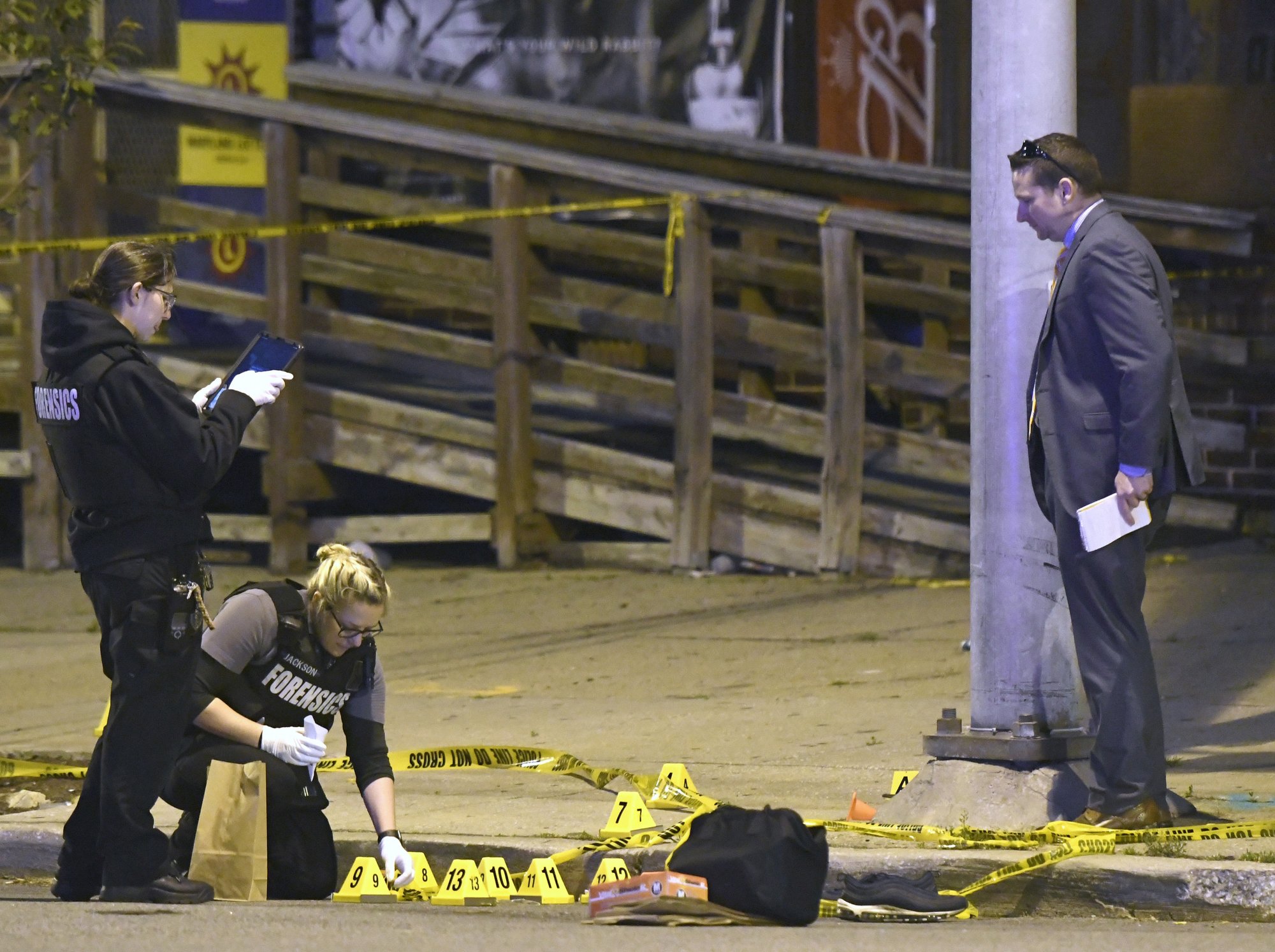 A gunman fired indiscriminately into a crowd that had gathered for Sunday afternoon cookouts along a west Baltimore street, killing a man and wounding seven other people, authorities and reports said.

Police Commissioner Michael Harrison said the gunfire erupted after 5 p.m. on a block in the city’s western district of brick row homes. Harrison said a man approached a crowd on foot and began firing in what he called “a very tragic, very cowardly shooting.” Speaking at the scene afterward, Harrison said the shooting appeared “extremely targeted,” but he didn’t provide a possible motive.

The shooting comes roughly six weeks after Harrison’s swearing-in last month as Baltimore police commissioner, when he promised to make the city safer and lead the department through sweeping reforms required by a federal consent decree. It’s a daunting task in one of the country’s poorest major cities where there were more than 300 homicides in each of the past two years. Harrison is the city’s 14th police leader since the mid-1990s.

The commissioner said there were two cookouts taking place on opposite sides of the street Sunday, and that shell casings were found in two different locations, indicating that there may have been a second gunman, or someone firing back at the first shooter, who fled on foot. It was unclear whether the cookouts were related, Harrison said.

One man who was shot collapsed behind a Baptist church nearby and was pronounced dead at the scene. Harrison said initially that six others had been wounded and were taken to hospitals, but he didn’t release their names or their conditions. A police statement later said a man was killed, but didn’t give his age. It said five of the survivors were men ranging in ages from 27 to 58, as well as a 30-year-old woman.

A police spokeswoman later Sunday evening was cited by The Baltimore Sun as saying an eighth victim, a man with a gunshot wound to the leg, went to a hospital. The report did not elaborate.

“It wasn’t anything dealing with the church. I want to make that very clear,” acting mayor Jack Young said.

Harrison and Young, in appearance with reporters, urged members of the public to help investigators with any information as to who took part or a motive.

“Someone knows something,” Young said. “These things … they don’t happen by happenstance. People know who’s doing these shootings.”

The Baltimore Sun reported that bullet casings were found scattered on the ground near grills, and a table still had items on it that appeared to be left from a cookout. Police officers could be seen after the shooting placing small orange evidence markers on the ground, just feet from a barber shop.

Meanwhile, Harrison said authorities were seeking witnesses among the many present Sunday as they begin to try to piece together details of what happened.

Baltimore has been plagued by drug-fueled violence for decades and it has long been considered one of the nation’s most violent big cities. The corrosive impact of the drug trade and a sea of illegal guns continue to spawn a depressing recurrence of tit-for-tat turf wars and retaliatory attacks in swaths of the city, particularly in the deeply disenfranchised areas of West Baltimore.

While city leaders continue a perennial quest to remake the city in the eyes of potential investors and visitors, Baltimore has been in the throes of a worrying increase of violent crime since 2015, when the homicide rate spiked after the city’s worst rioting in decades following the death of young black man in police custody.