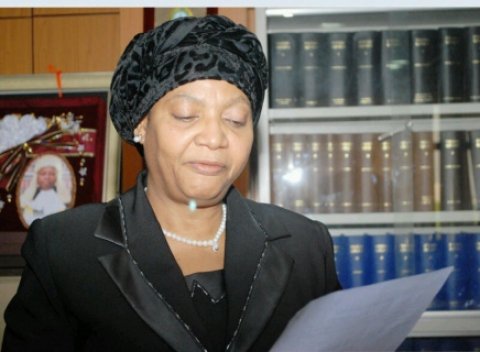 The President of the Court of Appeal, Justice Zainab Bulkachuwa, on Wednesday withdrew as a member of the Presidential Election Petitions Tribunal.

This followed allegations of likelihood of bias levelled against her by the Peoples Democratic Party, and its presidential candidate, Alhaji Atiku Abubakar.

Altthough, the five-man panel of the tribunal, in a unanimous ruling, dismissed the application on the grounds that the allegations of a likelihood of bias were not established; Bulkachuwa said she was withdrawing for “personal reasons.”

In the application filed on May 16, the petitioners alleged that their petition challenging the victory of the All Progressives Congress and its candidate, President Muhammadu Buhari, in the February 23 poll, would not be handled impartially by the tribunal due to Justice Bulkachuwa’s ties to top members of the APC.

They also quoted a statement made by Justice Bulkachuwa at the inaugural sitting of the tribunal on May 8 as pre-judging their petition.

Justice Bulkachuwa was quoted as saying in her speech at the inaugural sitting of the tribunal that, “Elections are held in Nigeria, every four years into elective positions. No matter how well the elections are conducted, there are bound to be complaints.”

But delivering the lead ruling on the petitioners’ application on Wednesday, Justice Olabisi Ige said nothing could be inferred from the quote to suggest that Justice Bulkachuwa had pre-judged the petition.

Justice Ige ruled, “To the petitioners/applicants, the above remark appears to them that the President of this court and the Presiding Justice of this panel had already pre-judged the presidential election as well-conducted and that this petition is one of the complaints that come up no matter how well the election was conducted.

“I am of the solemn view that no such inference is discernible from the above quoted statement. The entire speech ought to be read as a whole in order to truly discover what the content of the inaugural speech portrayed.

“Concerning the complaints of the petitioners/applicants to the extent that the affinity between the Honourable President of this court will engender a likelihood of bias on the part of the Honourable President of this court if she remains the Presiding Justice, I am of the firm view that enough materials have not been placed before this court to show that the Presiding Justice of this panel is likely to be biased against the petitioners/applicants in the hearing and determination of the petition.

“I am of the view that the fact that the Honourable President of this court is the wife of Honourable Adamu Mohammed Bulkachuwa and the mother of Aliyu Haidir Abubakar are not weighty enough to impute likelihood of bias against the President of the Court of Appeal.

“There is no allegation made against the spouse or the son of the Honourable President of this court in the petition of the petitioners/applicants.

“Their relationship with the Presiding Justice of this panel is not all capable of causing likelihood of bias against any of the parties in the petition.

“The full court has been empanelled consisting of five Justices of this court, in full appreciation of the importance of due process and just dispensation of justice in the hearing and determination of this case relating to the presidential election, notwithstanding that the court will be duly constituted if it consists of at least three Justices of the Court of Appeal.

“I have deeply ruminated over the affidavit evidence filed in support and against the application of the petitioners/applicants and the various submissions of the various learned counsel to the parties in this petition and I am of the view that the petitioners/applicants have not been able to positively establish the need for the Honourable President of this court and the Presiding Justice of this panel to recuse herself from further sitting or participating in the proceedings in this petition.

“Consequently, the petitioners’ application fails and it is hereby dismissed.”

All the members of the panel, including Justice Bulkachuwa, agreed with the lead ruling.

Despite that, Justice Bulkachuwa said, “I am recusing myself from the panel for personal reasons.”

She, however, said she was satisfied that the matter had been settled “based on the facts and the law” so that “another female judge will no longer have to face what I have faced.”

She said a new presiding Justice would be appointed for the panel, but that the four remaining members of the panel would continue with the hearing of the preliminary applications pending the appointment of the new head of the panel.

A new hearing notice is to be issued for the next sitting of the tribunal.

All the lawyers representing the various parties to the petition – the PDP and Atiku, the Independent National Electoral Commission, APC and Buhari’s lawyer, Chief Wole Olanipekun (SAN), said the decision had saved the judiciary from an embarrassment.

The petitioners’ lawyer, Livy Uzoukwu (SAN), said his team filed the application in their interest to protect the right of their clients.

He added that the application was “never personal,” adding that it was carefully done “to respect the institution.”

All the respondents’ through their lawyers –Yunus Usman (SAN) for INEC, Olanipekun for Buhari, and Lateef Fagbemi (SAN) for the APC, had earlier opposed the petitioners’ application.

But in what appeared to be candid advice, the lawyer representing the APC, Fagbemi, urged Bulkachuwa to “leave the matter” for the sake of her name and her retirement from the bench that is only barely a year away.

He said, “As it is fast becoming the norm and regrettably so, this is another havoc wreaked on the finest Nigerian jury. This is not the first time this is happening.

“Just recently, Justice Oyewole, whose immortal contribution was acknowledged by the counsel for the applicants a while ago, was written against not to be allowed to sit on the appeal panel on the Osun State governorship election petitions tribunal.

“Nebulous as ‘likelihood of bias’ is, it has its own boundaries. The exhortation in all the authorities that have been cited, recognises that each case will have to be dealt with on its own merit.

“But, with respect, next year, your lordship, the President of the Court of Appeal, will be bowing out gloriously by God’s grace.

“My lord, your youthful look may confuse one. You are old enough to be my mother. My lord, you standing in as my parent, I will say, ‘Mum, leave the matter.’”

Opposing, INEC’s lead counsel, Usman, said the application by the petitioners was discriminatory against female judges married to politicians by virtue of Section 42 of the constitution.

He said, “We have to be careful. Let no politician wreck the only institution keeping the Nigerian democracy. My lords, I urge you not to be lured by this argument because it is an attempt to throw a stone into the market because we don’t know whom it may hit.”

He argued that the constitution of the panel hearing the presidential election petitions was within the discretion of the President of the Court of Appeal.

Olanipekun said, “My lord, our position is clear. No one can impose his authority or his will on the court, particularly on the President of the Court of Appeal.

“My lord, it is your discretion to constitute the panel. The 2nd respondent (Buhari) has no say in the constitution of the panel or the panel of any election petitions tribunal.

Reacting to the issue, the PDP said it had nothing against the person of Justice Bulkachuwa.

Rather, it said it decided to file the application in order to protect the integrity of the judiciary.

The National Chairman of the PDP, Prince Uche Secondus, who spoke with one of our correspondents, said, “We have nothing personal against Her Lordship. Rather, what we did was to help her protect her name. Natural justice demands she doesn’t sit in such a case. That’s what she has done. That’s fine by us. We are okay with her decision.”

Meanwhile, the Civil Society Legislative Advocacy Centre and the Women in Nigeria, on Wednesday, described the application by the PDP and Atiku as discriminatory against women.

In a statement signed by the Executive Director, CISLAC, Auwal Ibrahim Musa, and Ms. Chioma Kanu of Women In Nigeria, the groups described the application as a case of gender discrimination “under a baseless political reason and unjustified grounds that her spouse is a member of a political party.”