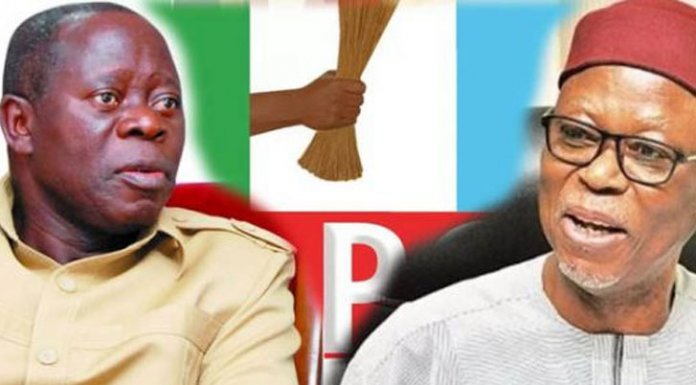 Deputy National Publicity Secretary of the All Progressives Congress (APC), Mr. Yekini Nabena, has called on President Muhammadu Buhari to end the hostilities between some leaders of the party, particularly the National Chairman, Comrade Adams Oshiomhole, and the former National Chairman, Chief John Odigie-Oyegun.

He said the war of words between the duo was unnecessary and a distraction. Oshiomole had accused Oyegun of creating the mess the party was currently battling with. He also accused him of promoting indiscipline in the ruling party. But Oyegun fired back, saying his successor conducted the most fraudulent primaries in history, while also offering to tutor him on how to manage a party successfully. Nabena while speaking to journalists Wednesday in Abuja on the ongoing infighting said that it was time for  Buhari as the party leader to lead fence-mending efforts and address obvious grievances in many states and among stakeholders in the party.

Nabena stated: “In the immediate, I call on President Muhammadu Buhari as the leader of our party to lead fence-mending efforts and address obvious grievances in many states and among stakeholders in the party.” The losses the APC suffered during the 2019 general election in some states which we previously controlled is indeed worrisome. However, we are still the governing party which produced the President; control majority in states and have an overwhelming majority in the National Assembly.

“Compared to the failed Peoples Democratic (PDP), the APC remains the political party of choice for both Nigerians and politicians. I urge our aggrieved members to remain in the APC fold and settle their differences. In fact, in a few months, we expect a huge influx from members of the rudderless PDP and other political parties into the APC.

“Elections have been won and lost. High-level meetings such as National Caucus and the National Executive Committee (NEC) are there to address party matters. I call on our respected leaders, particularly the current and immediate past national chairmen to end their public hostilities, particularly in the media for the sake of the party and focus on the important task of forming government at the state and federal levels to deliver on our Next Level mandate. We need a united house to ensure the growth and strength of our party.”