Osinbajo, Oshiomhole, Others For APC Summit In Anambra 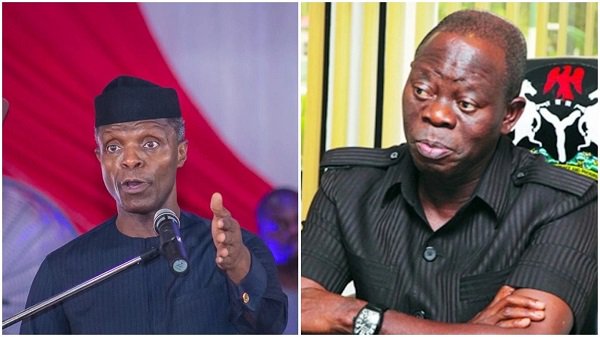 The Vice president, Prof Yemi Osinbajo, National Chairman of the All Progressives Congress APC, Adams Oshiomhole will be some of the big names to attend the party’s political summit in Anambra on May 1st.

While the Vice president will declare the summit open, Oshiomhole will deliver the keynote address, with the former Senate president, Ken Nnamani to deliver one of the lectures on the day.

This is part of the activities lined up by APC in the state, under the leadership of Chief Basil Ejidike among others, to re-position the party in Anambra state.

The party has equally concluded arrangements to set up a committee on how to bring back some of the elders of the party, who had backed out as a result of neglect.

Some of the elders of the party were, former Governor of the state, Dr Chinwoke Mbadinuju, Senator Ikechukwu Obiora, Chief Dr, Obinna Uzor among others.

Before now, the party had set up a committee to investigate the abysmal performance of APC in Anambra State during the last elections of which the report was being awaited.

Addressing reporters on Saturday at the Olde English Hotels in Awka, the Acting Chairman of the party in the State, Chief Basil Ejidike, flanked by all the executive members, said ‘enough is enough’

He said the next target of APC was to win the Governorship election of Anambra State come 2022, adding that the party still had a lot of grounds to cover in the state.

Other activities lined up by the party apart from the three day summit included, the tour of all the 21 local government areas in the state, visit to all the federal government projects in Anambra,verification of the party’s register among others.

Ejidike, who admitted that the party had not reached it’s height in Anambra State, however, gave kudos to the members to giving their best, adding that the aim of the current moves was to take APC to where it belonged.

He said another important thing starring the party in the face was putting up a committee to harmonise all the warring factions in the state, which would give the party the opportunity to take over the state completely.

According to him, “our aim is to take over power in Anambra as soon as possible and our target is the next governorship election and we are saying enough is enough “Ejidike said.