Manhunt Launched Over ‘Attempted Abduction Of Girl, 15, After Two Men Try To Bundle Her Into Car’ 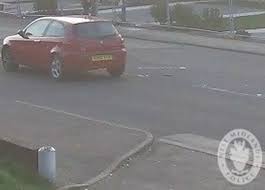 A Manhunt has been launched over the attempted kidnap of a 15-year-old girl.

The teen was walking through Chelmsley Wood, West Mids, when two men tried to bundle her into an Alfa Romeo car, reports claim.

They approached and asked her for time before striking on Blackcat Close, at 7.10pm on Thursday April 11, West Midlands Police said.

She then “felt someone grab her shoulder and when she turned around the passenger door of the red car slammed shut and drove off”.

Cops have released a picture of a red car they believe was linked to the attempted abduction.

The passenger is described as white, aged late 20s, with dark brown hair and dark brown stubble. He was wearing a grey jumper and dark blue jeans.

Detectives are keen to hear from anyone who saw the car in the area on that day or anyone with information to get in touch.