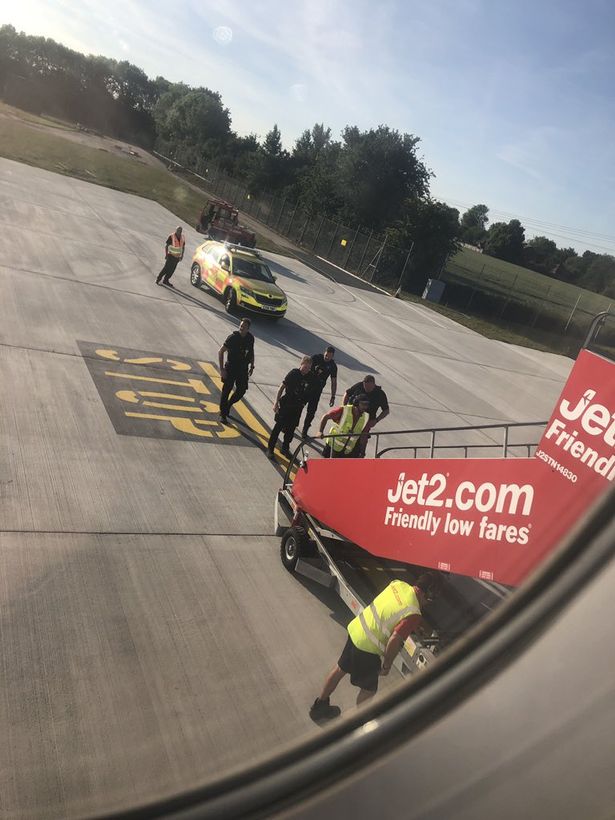 A passenger on the Jet2 plane which returned to Stansted Airport after RAF Typhoons intercepted it on its way to Dalaman, Turkey, said one woman was drunk and “tried to open the aircraft door”

The woman is said to have been drunk on the plane which left Stansted Airport tonight and is accused of becoming “disruptive”.

She was arrested on suspicion of two assaults and endangering an aircraft after RAF jets had to escort the Titan Airways A321 plane back to the airport near Bishops Stortford, Essex.

Speaking to Mirror Online, a fellow passenger said: “I was on the flight to Dalaman from Stansted and, after 45 minutes of being in the air, this lady gets called to the front of the plane and she starts shouting and screaming and runs to the airplane door.

“Cabin crew grabbed her to stop she starts scratching them hitting them, she then got pinned to the floor by cabin crew and passengers, a passenger even sat on her.

“She kept getting up and running back towards the door, she had six people sitting her we had to fly back to Stansted for the police to get her.”

She said other travellers were “very shaken-up” after the ordeal.

BBC News reports a 25-year-old woman has been detained tonight. Essex Police has been approached for comment.

And the photos and videos, seen by Mirror Online, show police storm the plane at Stansted and take the suspect off the aircraft.

A woman is heard shouting and screaming in the clip.

Other passengers can be heard cheering when police officers get on the plane.

She’s pictured leaving the jet and being put into the back of a police van.

In addition to the jets from RAF Coningsby, Lincolnshire, an RAF Voyager also departed from Brize Norton, Oxfordshire.

The RAF jets’ movement caused an almighty bang which was heard as far as 18 miles away in Chelmsford, Essex, and had residents fearing an explosion had happened.

A sonic boom is a loud explosive noise caused by the shockwave of an aircraft travelling faster than the speed of sound.

A statement from Hertfordshire Fire Control reads: “We’ve been made aware by the Police that this was a sonic boom from the Stansted airport area. Police received numerous calls and we received calls from the Bishop’s Stortford area.”

A Jet2 spokesperson said: “We are aware of an incident regarding an extremely disruptive passenger on a flight from Stansted to Dalaman earlier this evening.

“The aircraft has returned safely and we are liaising with the relevant authorities to support their investigation. We are working hard to ensure the remaining customers reach their destination as soon possible.”