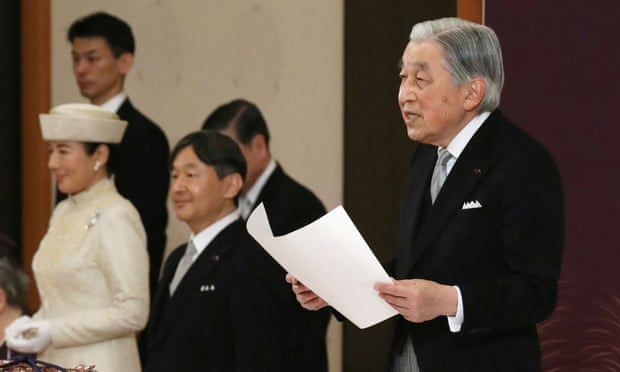 Japan’s emperor Akihito has called his 30-year reign a blessing and thanked the people of Japan for their support as he became the country’s first monarch to abdicate in two centuries.

Speaking at a brief ceremony in the state room of the imperial palace a day before his eldest son, Naruhito, takes his place as the new occupant of the chrysanthemum throne, the 85-year-old Akihito said he had spent the 30 years of his reign performing his duties with “deep respect and love for the people.”

“That has been a great blessing,” he said, before offering his “heartfelt gratitude to the people of Japan who accepted me as the symbol of the state and supported me”.

He said he hoped the country’s future would be a “stable and fruitful one, and pray with all my heart for peace and for the happiness of people in Japan and around the world”.

Akihito, who expressed a desire to abdicate in 2016, fearing his age would make it difficult for him to carry out public duties, entered the Matsu no Ma (Hall of Pine) at the imperial palace early on Tuesday evening and relinquish his title in a short ceremony that was broadcast live on TV.

Earlier the same day, Akihito, the first Japanese monarch to spend his entire reign stripped of political influence under the country’s postwar constitution, reported his abdication to his ancestors and the Shinto gods at sacred spots inside the imperial palace grounds in Tokyo.

They include the sun goddess Amaterasu Omikami, from whom, according to mythology, the 2,600-year imperial line is descended.

In the evening ceremony, his reign ended with the symbolic return of two of the “three sacred treasures” – a sword and a jewel – that were placed on stands by palace officials along with the state and privy seals.

Little is known about the regalia, which remained inside boxes throughout the ceremony.

Empress Michiko, Akihito’s successor crown prince Naruhito, and his wife and future empress crown princess Masako, were among the 300 people attending the ceremony, along with the prime minister, Shinzo Abe, the heads of both houses of parliament and supreme court justices.

Abe announced the abdication, followed by remarks from Akihito, whose 30-year reign – known as Heisei (achieving peace) – will officially come to an end at midnight on Tuesday.

Naruhito will ascend the throne on Wednesday morning in a similarly brief ceremony, during which he will “inherit” the imperial regalia before making his first public statement as emperor.

Female members of the imperial family will not be allowed to attend the ceremony, a tradition the government decided to retain despite criticism from sections of the public.

With his accession, the new imperial era, named Reiwa (beautiful harmony), will begin.

When he became emperor in 1989, Akihito said he would protect Japan’s postwar constitution, which stripped his father, the wartime monarch Hirohito and all future emperors of their divine status, turning them into symbolic figureheads.

Akihito, though, redefined the role of emperor, using his reign to repair ties with Japan’s wartime victims, including a historic visit to China in 1992.

Evocative images of his reign show him and Empress Michiko comforting people affected by natural disasters and reaching out to marginalised groups, including former leprosy patients who were incarcerated in state-run sanatoriums until the mid-1990s.

The 59-year-old Naruhito, who spent two years at Oxford and wrote his thesis on the history of transport on the Thames, and Masako, a Harvard-educated former career diplomat, will greet the public for the first as emperor and empress on Saturday.

They will not meet foreign heads of state and other dignitaries after Naruhito’s official enthronement ceremony in late October.

On Tuesday police stepped up security near the imperial palace, a sprawling site in the heart of Tokyo. Several thousand police officers were mobilised, with large crowds expected to brave rain forecast for Wednesday to celebrate Naruhito’s accession.

On Monday, police arrested a 56-year-old man who had allegedly entered the school attended by the emperor’s 12-year-old grandson, Prince Hisahito, and placed two knives on his desk.

Media reports said Kaoru Hasegawa is suspected of disguising himself as a repairman and entering the junior high school on Friday.

Hisahito, who will become second in line to the throne on Wednesday – and is Japan’s the last eligible male heir – was not at the school at the time of the incident.

The 1947 imperial household law does not allow women to become reigning empresses.