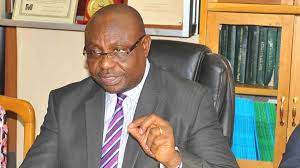 The INEC National Electoral Commissioner for information and Voter Education, Mr Festus Okoye has denied rigging the last weekend by-election for the Ogoja-Yala federal constituency in favour of the ruling APC in Cross River State.

Few days ago, the chairman of opposition PDP in the State, Venatius Ikem addressed a news conference in Calabar, accusing Mr Okoye who supervised the two by-elections of 26 February, 2022, of compromising his office and rigging the exercise for the APC.

Speaking over a private radio station in Calabar, Sparkling FM, Okoye said, “Nothing can be farther from the truth.”

He took time to explain the processes of the election to show that it could be very difficult to rig election with the Biomodal Voter Accreditation System (BVAS) machine deployed for the exercise.

He said part of challenges the INEC experienced during the 2022 by-elections were provisions of agents by other political parties and vehicles to accompany the electoral materials to the various polling units.

He explained that the anxiety and anger that arose from the by-elections were from persons who wanted to rig the process but could not.

“The challenge we had was that some of the political parties did not make provision for vehicles to accompany the voting materials to the polling units (PU). So, at each stage, the two major political parties had their representatives at the PU.

“These anxiety and anger arose because those who used to hawk voting materials like permanent voters’ cards did not have opportunity to corrupt the system this time around because of BVAS.

“BVAS was able to read the face and finger prints of accredited voters. In the event that he machine could not do so, it means that the person would have involved in identity theft, meaning that he was not registered at that PU, and the voter card he was holding was not his.

“That’s why you saw the level of contest and consistency in the numbers of votes scored by each party. Compare this with what used to occur when we used Incident Form. So, it tells you that those that vote at each PU were those registered there,” he stated.

Okoye further said that before the votes were counted, they had to interrogate the BVAS, and it gave them the number of registered and accredited voters at the given PU.

This, he said, was to ensure that the votes cast tallied with number of accredited voters.