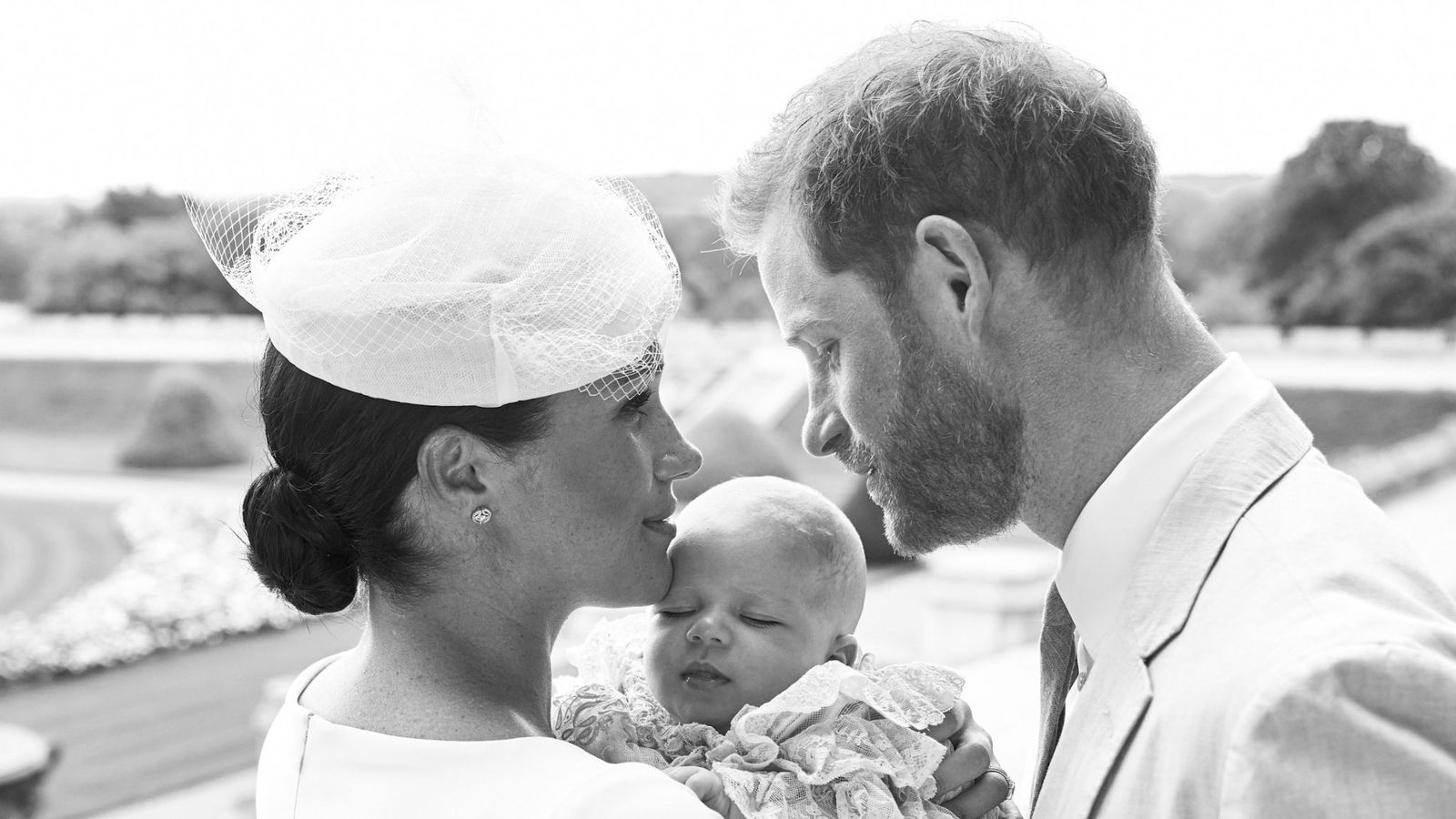 New photos of Harry and Meghan’s son, Archie, have been released to mark the two-month-old’s christening.

One intimate black and white portrait shows a sleepy looking Archie with his parents.

Another more formal picture shows the baby with his parents and grandparents including grandmother Doria Ragland.

The Duke and Duchess of Sussex drew criticism for holding the christening in private, barring TV cameras and press photographers – even as the family arrived for the Windsor Castle service.

But in an Instagram post the royals said: “The Duke and Duchess of Sussex are so happy to share the joy of this day with members of the public who have been incredibly supportive since the birth of their son. They thank you for your kindness in welcoming their first born and celebrating this special moment.

“Their Royal Highnesses feel fortunate to have enjoyed this day with family and the godparents of Archie.”

They gave some detail about the gown their son was christened in, saying: “Archie, was baptised wearing the handmade replica of the royal christening gown which has been worn by royal infants for the last 11 years.

“The original royal christening robe, made of fine Honiton lace lined with white satin, was commissioned by Queen Victoria in 1841 and first worn by her eldest daughter.

“It was subsequently worn for generations of royal christenings, including the Queen, her children and her grandchildren until 2004, when the Queen commissioned this handmade replica, in order for the fragile historic outfit to be preserved, and for the tradition to continue.”

Christenings for royal children have traditionally involved a media moment or photo opportunity.

However, Harry and Meghan’s decision to do things differently has led to debate about whether such an event should be completely private for members of the monarchy.

Duncan Larcombe, author of Prince Harry – The Inside Story and former royal editor for The Sun, said: “It seems like there is a pettiness and a truculence since he (Prince Harry) got married, since perhaps news of their relationship became public, I think you can trace it back to then – the sort of petulance that, over a longer period of time, could do him a lot of harm.”

Some details of the christening were disclosed ahead of the service and reflected important royal traditions.

The Lily Font and water from the River Jordan was used during the baptism and the Archbishop of Canterbury, Justin Welby, officiated the ceremony.

The event was attended by Harry’s brother William and his wife the Duchess of Cambridge, who was wearing Stella McCartney. Meghan was wearing Dior, royal sources said.

The Queen did not attend because of a prior engagement.

All the images were taken by fashion photographer Chris Allerton, who also took the Duke and Duchess’s wedding snaps.

Although the event was held in private, well-wishers flocked to Windsor Castle to join in the celebrations.

Anne Daley, 63, a lifelong fan of the royals, had been outside Windsor with her dog Camilla from 5am on Saturday.

She said: “We love everything about the royals. We’ve seen hands and feet, little fingers. But we’re very hurt. I pay a lot of tax for their civil duties.

“One minute they want to be royals, the next they don’t.

“That baby is Princess Diana’s grandson. We should be able to see the christening.”

The names of the godparents have not been released. Archie is seventh in line to the throne and not an HRH.