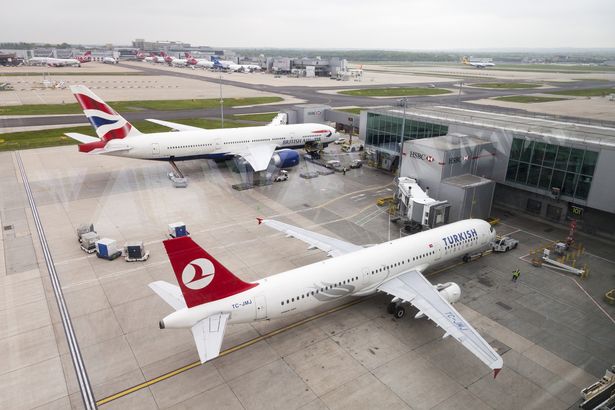 suspended all flights due to an air traffic control system problem which caused lengthy delays for airline passengers.

Incoming flights were diverted to other airports across the county, according to information on the Gatwick website.

“We are working with ANS, our air traffic control provider, to rectify this issue as quickly as possible,” Britain’s second-busiest airport said on Twitter.

A Gatwick spokesperson issued an update at 7.10pm to say that flights both in and out of the airport had restarted.

“Following an earlier air traffic control systems issue, flights to and from Gatwick have now resumed”, a statement said.

One passenger complained of “total chaos” on their Thomas Cook flight from the Canary Islands as their pilot attempted to find a landing location.

Stefano told the Mirror: “Flight from Fuerteventura was meant to be flying into Gatwick, circled the Midlands for an hour was told we were landing in Manchester.

Stefano said they eventually landed in Birmingham – 126 miles from their original destination.

Some passengers were “crying and panicking” due to the confusion, he added.

The technical glitch affected both arrivals and departures.

European air safety organisation Eurocontrol warned that the issue was likely to persist until 9pm.

Gatwick staff have told travellers to get in touch with their airline for further details about the status of their flights.

Passengers took to Twitter to complain that their flights had been grounded for hours as they waited on the tarmac.

The problem affected services from around 16:15, leaving some stranded in cramped cabins for hours as they vainly awaited clearance for take off.

In one instance, an easyJet pilot was pictured leaving the cockpit to tell disgruntled passengers that their journey to Amsterdam had been temporarily suspended.

One social media user reported: “For all those asking – no chance of any planes landing until at least 10pm tonight according to the easyJet flight I just boarded.

“Shame on Gatwick for a) not having a proper backup system and b) not communicating this more clearly.”

Kat Holt said on Twitter: “Can you advise how long you anticipate the issue fix to take – currently stuck in Crete being told “significant delays.”

Ben Giles said: “What an embarrassment!! No back up. 5 hour flight and told to land at Stansted last minute been sat here over an hour. Complete joke!”

In December, more than 600 flights were cancelled disrupting the travel plans of more than 110,000 people due to repeated drone sightings at Gatwick.