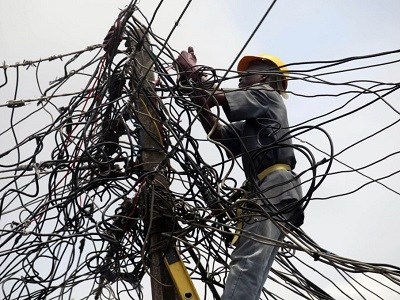 Mr Guillaume Audren de Kerdrel, Deputy Ambassador of France, has reaffirmed his country’s commitment to improving on the electricity transmission in Nigeria, particularly in the Federal Capital Territory (FCT).

Kerdrel made this known at the official ground breaking ceremony of the Abuja feeding scheme which comprised 330KV and 132 KV transmission lines on Thursday in Abuja.

The event was organised by the Transmission Company of Nigeria (TCN) and funded by Agence Francaise de Development (AFD).

The deputy ambassador said that the AFD’s commitment was to improve the everyday life of people both in the developing and emerging countries of the world.

According to him, the supply of quality electricity is the profound aspiration of Nigerians across the country, especially in the FCT.

“Abuja was planned and built in the 1990s, but today hosts three million inhabitants, France through AFD pledges to make tangible, sustainable impact on people living and working in the FCT.

“The overall aim of this project is to strengthening the power supply, infrastructure and also to increasing the capacity of the power transmission network around the capital city.

“When completed, this will improve on high voltage supply of electricity injection points to three, instead of just once today.

“It will not just improve the quality and quantity available in Abuja, it will also improve the stability, reliability and efficiency of electricity transition system in the FCT,” he said.

Kerdrel said that the issue about sustaining cities had become a thing of concern that would be discussed at the forthcoming African/France summit to hold in June 2020 in France.

He said that workers would soon be deployed to project cites in Abuja such as Kuje, Apo, West Main, Mumba, Lokogoma, Lafia, Keffi and other areas in Nasarawa State.

Mr Louis Edozien, the Permanent Secretary, Federal Ministry of Power, Works and Housing, commended the partnership between TCN and AFD, saying it was apt in tackling electricity problems in the country.

“The contractors who are partnering with TCN and AFD on this project are first class, the record speaks and we hope that they will demonstrate high performance.

“There is an additional 620 megawatts of capacity that this project will deliver and 3933KV line that the programme will also deliver.

“The whole purpose of this project is to ensuring human beings get better service that is what this is about and without AEDC this entire project is not useful.

“It is the distribution company that must play the role of taking this extra capacity and delivery to the customers; it is an end-to-end delivery that we are gunning for,” Edozien said.

He noted that the project would not just focus tackling problem of transmission in Abuja, adding that there would be construction of five new substations, in addition to rehabilitating existing ones.

“We are happy to tell you that the transmission, rehabilitation and expansion programme to be implemented by TCN is on track and that is why we are here.

“From Dec. 23 to date, we have achieved frequencies contribution of 49. 8 and 50. 2 base and 69 per cent which is the best since history of the country.

“We believe that by June this year, we should be able to achieve frequency control that is the best in the entire West Africa and that is our objective,” Mohammed said.

The News Agency of Nigeria (NAN) reports that the high point of the event was the official laying of foundation stone by both France envoy and the Permanent Secretary.

2019-04-11
Previous Post: Speakership: Why I Stepped Down For Gbajabiamila , By Monguno
Next Post: Buhari Departs Abuja Saturday For CEN-SAD Meeting In Chad