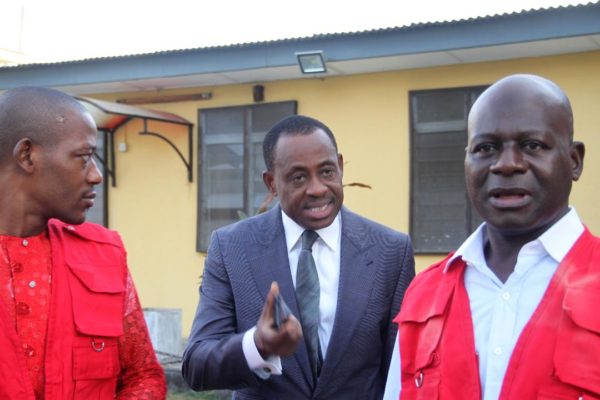 Ogo, a Legal Officer with Polaris Bank, formerly Skye Bank, testified at the beginning of the trial of Odukoya over alleged N1.7 billion theft.

He was led in evidence by Mr Anselm Ozioko, lead counsel to the Economic and Financial Crimes Commission (EFCC), prosecuting the case.

The legal officer, who is the first prosecution witness, said that Odukoya, the alter ego of Bellview Airlines and FirstNation Airline (the second and third defendants) had, from 2007 to 2012, obtained various loan facilities from the bank.

He said: “As at December 2016, he obtained facilities accumulating to about N3.4 billion and 2.4 million dollars.

“At the point of the first application for these facilities, the defendant undertook to avail the bank of some collateral.

“The collateral include properties at 29 and 30 Oduduwa Way, Ikeja, and 35 Ladipo Bateye St, Ikeja, which the first defendant alleged belonged to him.

“On the basis that the property belonged to him, the bank disbursed the loan facilities to the defendants.

“When the bank commenced mortgage of these properties with particular reference to the property at No. 29, Oduduwa Way, Ikeja, with registration No. 33 on page 33 volume 1011 at the Lagos State Land Registry, Alausa, it was discovered to be false.

“Relying on same, the bank wrote to the Land Registry to confirm the registered number as furnished by the defendant and the bank received a response that the referred number does not exist in the record to the referred property.”

The prosecution witness said that the bank, upon receiving feedback from the Land Registry, contacted Odukoya who provided a memorandum of loss, a sworn affidavit, police extract and a March 8, 2013 publication of National Mirror newspaper.

Ogo informed the court that page 50 of the newspaper publication declared that the title document of the property was missing, stating that whoever found the document would be rewarded handsomely.

He said that further investigations by Polaris (Skye) bank revealed that the registration number of the property was fake and that Odukoya had used the same property as collateral for another loan from another bank.

“The bank’s internal investigation in respect of that property showed that the registration number of that property was Page 5, Vol. 5 of 1011, which the first defendant had used as collateral.

“The bank thereafter instructed its external solicitor to petition the EFCC as regards the act of the defendant.

“The instructed solicitor also wrote to the defendant referring to the converted sums of the bank which were earlier stated as N3.4 billion and 2.4 million dollars.

“The defendant responded that the referred amount was not involved but rather it was N1.7 billion.

“Subsequently another petition was written by our lawyer to the EFCC to carry out investigation on the fraudulent act of the defendant of obtaining the bank’s money by false representation of facts.

“Investigations were carried out which consequently made me to make statements to the EFCC in respect of the suit,” Ogo said.

The witness said that the loans were granted to Odukoya because his application inferred some urgency for the funds to run the operations of FirstNation Airways and Bellview Airlines.

“My lord, when Bellview Airlines Ltd. was in operation, it started banking with Skye Bank Plc in 2006/2007.

“FirstNation Airways came onboard with the same alter ego of the first defendant, and upon the application of Skye Bank, there was a memorandum of understanding wherein First Nation Airways took over the outstanding indebtedness of Bellview Airline.

“The money has not been returned to the bank, my lord, till today. This money is about N1.7 billion according to the defendant,” the Polaris Bank representative said.

The News Agency of Nigeria (NAN) reports that the EFCC is alleging that Odukoya committed forgery, use of false document and perjury on March 21, 2013, in Lagos.

According to the prosecution, the defendant forged the memorandum of loss of Lagos State Certificate of Occupancy registered as No. 33 at page 33 volume 1011 at the Lagos State Land Registry, Alausa, Lagos, in order that the document be acted upon as genuine.

The forged document was alleged to be in respect of a property located at No. 29, Oduduwa St., Ikeja, GRA, Lagos.

Odukoya is also alleged by the EFCC to have used the false document, and also gave false information on oath, concerning the loss of the certificate of occupancy at the Lagos State Land Registry.

The anti-graft commission also alleged that on Oct. 7, 2016, Odukoya stole and dishonestly converted to his own use, N1.7 billion belonging to Skye Bank Plc.

However, the defendant, who was arraigned on March 15, 2018, pleaded not guilty to the four-count charge of forgery, use of false documents, perjury and stealing.

Justice Mojisola Dada adjourned the case until June 24 for continuation of trial.